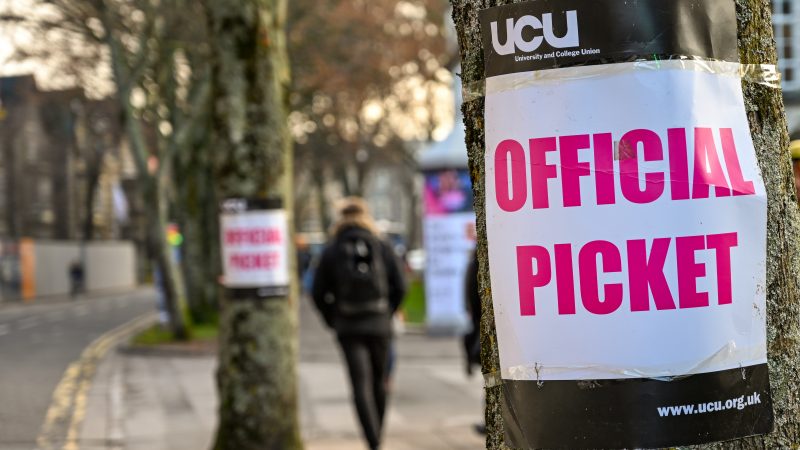 Across universities, the results are in: we are going to strike for better pay, proper pensions and decent working conditions. In just three weeks, universities up and down the country organised to get out the vote, with over 70% of those who voted backing strike action. This sends a powerful message to management. We will no longer accept the miserable status quo.

This message is so powerful because, as a trade union rep at King’s, I can tell you that it’s difficult to organise academics. Academics are independent, they don’t work together in large teams, and they aren’t in the office at the same time. Organising means diligently building personal relationships, constantly speaking to our members, and resolutely fighting for their rights. At King’s College, we secured the one of the highest turnouts in the country by doing precisely this.

The strength of turnout is a testament to the strength of our discontent. Academia may bring to mind a vision of lecturers discussing ideas in a leisurely fashion, free from the hustle and bustle of commercial life. But this idyllic picture could not be further from the truth. The life of a modern academic is more than just stressful – it is fast becoming miserable. We’re working harder and longer for less pay and little guarantee of jobs or decent pensions in the future.

The recent story of a lecturer who had to live in a tent to make ends meet was sad precisely because it was so unsurprising to those of us who work in higher education. It is the logical endpoint of a system where staff are pushed ever harder to deliver ever more and are expected to quietly accept it. Well, we will not quietly accept it. We will make our voices heard. We will strike – for five reasons that I will set out in detail because some accounts have misrepresented our position.

Firstly, pensions. The current proposal is for pension benefits to be cut by up to 25%. The proposed cut is so large because our pension scheme is supposedly in deficit. This calculation, however, is based on a faulty valuation. The pension scheme was valued in March 2020, when stock markets had fallen off a cliff at the beginning of the pandemic (see Figure 1). Stock markets have subsequently risen – and the value of assets in the scheme rose by around 25% – more than enough to cover the supposed deficit.

Secondly, pay. Our pay has been cut by around 8% in real terms since 2010. Vice-chancellor pay rose by over 10% in the same period. In the past year, 15 of the best-paid vice-chancellors in the country had their pre-pandemic pay awards reinstated despite large-scale losses and almost 2,000 redundancies at their institutions. Some numbers speak for themselves.

Thirdly, our workloads have increased to unsafe levels. We are working, on average, an extra two unpaid days each week and 2/3 of us find our workload unmanageable at least half of the time. This has left half of UK academics with stress-related mental health problems. We deserve jobs that don’t leave us on the edge of mental breakdowns. Fourthly, pay equality. Women are paid 15% less than men. This is unacceptable and it must change.

Finally, over 130,000 academics are on short-term contracts. They don’t know whether they’ll have a job when their contract ends. They’re also on shockingly low pay – around half take home less than £1,500 a month and half of their work is unpaid. Around 60% of these casualised workers are struggling to make ends meet and 70% have mental health issues. We need secure jobs so we can stop moving from city to city unhappily chasing unstable short-term contracts that don’t pay the bills.

Our vote to strike is part of a broader, heart-warming movement of workers across this country and abroad finding their voice and fighting for better pay and conditions. As a labour movement, we are making it clear that we will not accept breadline wages and unsafe working conditions. And together we will win.