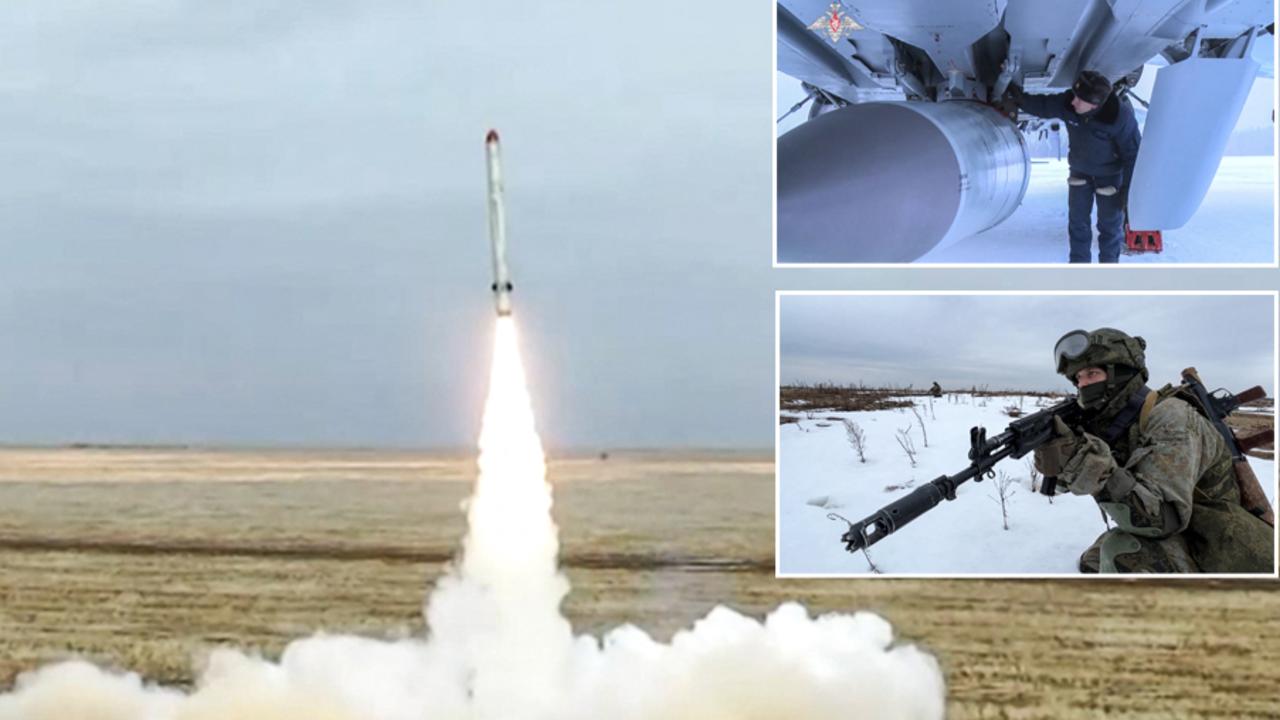 Russia’s nuclear submarines and mobile missile launchers have carried out drills just days after an alarming announcement from Vladimir Putin.

Russia has issued a chilling warning for Kyiv residents, ordering them to escape now ahead of a new wave of brutal attacks by “high-precision weapons” on the capital.

It comes after at least five people were killed after Russian missiles hit Kyiv’s TV tower as the invasion of Ukraine escalates.

It is believed to be part of a deliberate strategy of targeting essential facilities, apparently in a bid to demoralise the Ukrainian people.

As a result of the strategy, Russia’s defence ministry has urged residents living near critical infrastructure to flee their homes for their own safety.

Since the invasion began, more than 600,000 refugees have fled the nation, according to the UN, with UN High Commissioner for Refugees Filippo Grandi claiming the situation “could become Europe’s largest refugee crisis this century”.

Read on for the latest updates below.

In a statement, Russia’s Northern Fleet confirmed several of its nuclear submarines had participated in the exercises in the Barents Sea designed to “train manoeuvring in stormy conditions”.

It also confirmed that warships protecting the Kola Peninsula would join.

The news comes as Russian troops were ordered to be “combat ready” following Mr Putin’s invasion of Ukraine last week.

An apartment building located near a hospital has been hit as Russia ramps up its attack of Ukraine’s second-largest city, Kharkiv.

According to CNN, the complex has been engulfed in flames and is all but ruined, with several bodies seen at the scene.

Chilling warning as locals urged to get out now

The Russian defence ministry brazenly announced plans to carry out strikes on the Ukrainian security service and its alleged “Psyops Unit” in the centre of Kyiv.

“In order to suppress information attacks on Russia, the technological infrastructure of the SBU and the 72nd main PSO (Psychological Operations Unit) centre in Kyiv will be hit with high-precision weapons,” Russian spokesman Igor Konashenkov said.

“We call on … Kyiv residents living near relay nodes to leave their homes.”

Meanwhile, the United Kingdom Ministry of Defence has claimed in an intelligence update that “increased numbers of Russian air and artillery strikes have been conducted against densely populated urban areas across Ukraine”.

The ministry also claimed a large Russian convoy of troops and vehicles was en route to Kyiv.

“The column is a mixed force of combat and logistics vehicles with the bulk of the forces remaining approximately 30km from the centre of the city,” it stated.

“Ukrainian forces continue to hold the cities of Kharkiv, Kherson and Mariupol however all three cities are now likely encircled by Russian forces.”

The grim news was confirmed by the Ministry of Internal Affairs of Ukraine, which shared a photo of the blast and warned that as a result of the shelling, TV channels had been temporarily knocked out.

“The enemy can spread fakes in order to destabilise the situation. You know, Ukraine is fighting and enduring!” the ministry tweeted.

Ukraine’s defence minister, Oleksii Reznikov, also took to Twitter to claim Moscow planned to cut off the internet and access to communications in a deliberate strategy designed to break the will of the Ukrainian people.

“Its goal is to break the resistance of the people and the army. They can arrange a breakdown of connection. After [that] the spread of massive fake messages that the country’s leadership has given up,” Mr Reznikov posted on Twitter.

Meanwhile, Ukraine’s Foreign Minister Dmytro Kuleba condemned the latest strike – which occurred near the site of a Holocaust memorial – as “evil and barbaric”.

Russian units ‘surrendering’ without a fight

The Pentagon claims the morale of Russian troops has plunged, leading to soldiers “surrendering, sometimes without a fight” in some instances.

The claim was made by a senior defence insider, who said intelligence has noted “certain risk-averse behaviour by the Russian military.”

“The Russians have been surprised by some of the morale problems that they’re experiencing and I think they’re none too pleased about the logistics and sustainment challenges they’ve had,” the official said during a press briefing, according to the New York Post.

The official said many of the troops were “very young men” and “conscripts” without thorough training.

The official added that Russian President Vladimir Putin was likely “regrouping, rethinking, re-evaluating” the assault on Kyiv, and that Moscow might “change their tactics” as a result.

“One reason why things appear to be stalled north of Kyiv is that the Russians themselves are regrouping and rethinking and trying to adjust to the challenges that they’ve had,” the official said.

Elsewhere, terrified Russian Marines defied orders to storm a mine-filled Ukrainian beach — and instead forced their fleet of warships to turn around and flee, according to local reports.

Members of the 810th brigade of Russia’s Marine force allegedly told Ukraine’s Dumskaya paper that they had been ordered Monday to carry out an underwater assault on Luzanovsky beach in Odessa.

But at the last minute, “a real rebellion took place” and the crews managed to turn around their ships and flee the bay, according to the report also shared by the Odessa Journal Tuesday.

Ukraine’s second-largest city, Kharkiv, has also been targeted by Russian strikes which left at least nine people dead and 37 injured.

“Today we had a very difficult day. It showed us that it’s not just a war, this is a massacre of Ukrainian people,” Mr Terekhov.

“Kharkiv has not seen such damage for a very long time. And this is horrible.”

It comes amid unverified reports of a major explosion at an air base near Kharkiv.