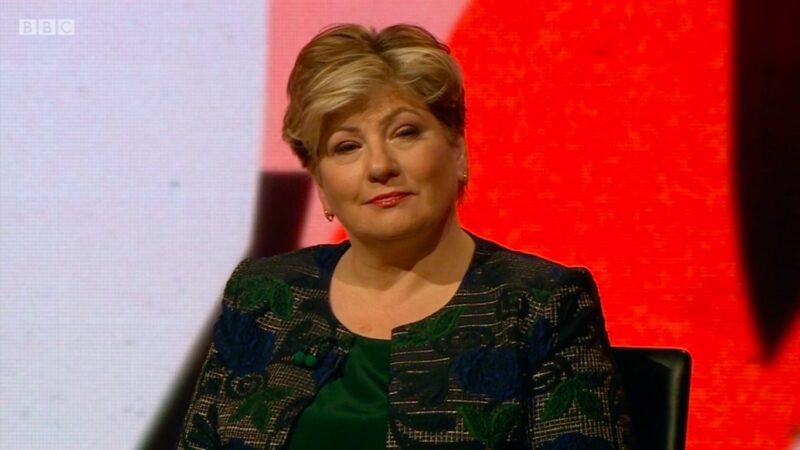 Emily Thornberry has used an interview with Gloria de Piero on GB News today to share her experiences growing up with a “terrible father” and her thoughts on the Rochester tweet that forced her resignation in 2014.

In ‘The Real Me‘, airing at lunchtime today, Labour’s Shadow Secretary of State for International Trade talked about the way she is caricatured, saying “a lot of it’s fair” because: “I live in North London, I’m from Islington, I’m a barrister.

“I’m married to a really successful barrister who’s become a judge, a High Court judge. He was knighted. He’s now in the Court of Appeal. I’m very proud of him and we’ve done well, you know, and I talk like this.”

But she added that there is a “hidden side to Islington that people don’t realise”, with poverty, and that this applies to her, too. “I’ve done well. But you know, my parents split up when I was seven,” she said.

“We were chucked out. The bailiffs turned up. I remember they were wearing bowler hats. We were homeless. A Labour councillor helped my mum get a council house, and for that reason, we were able to stay together and get help to get onto benefits and all of that stuff.

“So I was on free school dinners, like half the kids in my primary schools, and we had bags of clothes given to us and boxes of food… We were really poor. We lived in second-hand clothes, had food parcels and free school dinners. And my main meal of the day was a school lunch.”

Describing her “very mixed background”, she explained that when her parents split up her father – a university lecturer at the LSE – “disappeared” and “eventually went to work for the United Nations”.

“He was this incredibly glamorous figure, that sort of flitted backwards and forwards. He would turn up, you know, unannounced, with gifts from India,” Thornberry told GB News.

“First of all, he disappeared for quite a long time. And that was when we got chucked out of the house because there was, like, no money coming in at all. So that’s when we couldn’t pay the mortgage and all that stuff.

“And then he turned up again. I think he lived in Norway for quite a long time. I mean, honestly, I don’t know.” She said she went to live with her father in London at 16, but when she left for university he went to New York and “didn’t come back”.

Asked by former colleague Gloria de Piero whether he was a good dad, Thornberry replied: “He was a terrible father! He was the most terrible father, but he was a great man. So it’s this mixture…

“He was a great lover of people, particularly a lover of women! He married many, many times and had loads of girlfriends, but he was a terrible father. Because with a father, you need to have consistency, you know, affection. You need to have some stability. He didn’t have any of that.”

“There were [his] children all over the world, quite frankly, whose belief in themselves was not what it should be, quite often, because of the behaviour of their dad, because he’d been completely irresponsible and totally selfish. But I still loved him and he was there by himself… and I forgave him.”

Asked about her 2014 Rochester by-election tweet, which featured a photo of a house with England flags and a white van outside, Thornberry said: “What was really hard about it was this idea that I was in some way being snobbish. I mean, I’ve been brought up on a council estate, in a house that looked very similar to that!

“My brother, you know, was a builder. He didn’t have a white van, he had a red van. My other brother works for Sainsbury’s, drives the trucks for Sainsbury’s. I’ve got a sister who’s a bus driver. I mean, like… what? What? What can I do? Why are people saying this?”