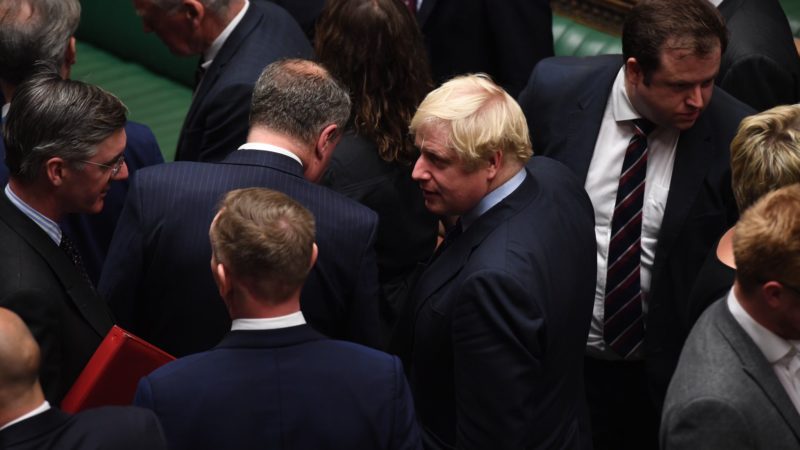 Boris Johnson is having a bad couple of weeks. The Owen Paterson row, which saw him eventually step down after an aborted attempt by the Conservatives to protect the disgraced MP, has turned into a wider discussion about sleaze. Iain Duncan Smith is facing questions over a conflict of interest that saw a government taskforce he chairs recommend new rules benefiting a firm paying him £25,000 a year. Geoffrey Cox reportedly spent several months this year working a second job in the Caribbean and stands accused of using his parliamentary office for this work.

Labour has an opportunity here. Polls indicate the public are unimpressed with Johnson and the Tories amid the scandal. Ipsos Mori research, partly carried out while the government was whipping MPs to reject the suspension of Paterson, showed the Tories losing their opinion poll lead. 36% of voters said they intend to back Labour in a general election, unchanged on a survey in September, while 35% said they would vote Tory, down four points. It also showed a drop in the proportion of people who think that Boris Johnson has what it takes to be a “good Prime Minister”. 55% disagreed that he did, up 12 points and his worst score since 2019.

The details of the Cox case show how the ongoing row is actually a conflation of two arguments: 1) malfeasance, or sleaze; and 2) MPs holding second jobs. A video has emerged that seems to show the former Attorney General participating in a legal hearing from his office in Westminster. MPs are categorically not allowed to carry on such outside work from the parliamentary estate: using taxpayer-funded resources to line your own pockets is, unsurprisingly, a breach of the code of conduct. But Cox being paid £1m over the past 12 months to defend the British Virgin Islands in a corruption case is perfectly allowed. The point of contention that saw Paterson rebuked and then resign was the “egregious lobbying” of officials and ministers, not being paid £112,000 to boost his £82,000-a-year salary.

People are discussing not only rule-breaking, but also whether MPs should take employment alongside their elected office. At a time when prices are rising, taxes are going up and the post-Covid outlook is still bleak for the economy, it is the vast sums of additional cash earned by their elected representatives that is bothering some. Sajid Javid speculated this morning that a number of MPs would leave if they were stopped from taking additional employment. Hot on the heels of the government decision to cut Universal Credit by £20 per week, one backbencher complained that they would not be able to afford childcare without a second job. (The standards allowance for Universal Credit for a single person over 25, not including rent, is £324.84 a month.)

68%, according to a Survation poll this week, think MPs should not be allowed to take second jobs. Perhaps they do not want to see representatives go looking for extra cash while doing what should be a full-time job, or do not enjoy hearing complaints about a wage that they themselves will never earn. Nobody should be left in any doubt that this is a very Tory problem. The parliamentary register of interests show that 90 out of 360 Conservative MPs have extra jobs, compared with just three from the Labour Party. These Tories are overwhelmingly older and 86% are men. 11 receive more than their £82,000 MP salary. The highest earner was Andrew Mitchell, who made £182,600 for 34.5 days’ work, while Chris Grayling is earning another £100,000 a year, John Redwood is making an additional £230,000 and Alun Cairns is raking in an extra £60,000.

The second jobs of MPs is a trickier issue for Labour than Tories just breaking the rules, however, because Labour MPs have also taken second jobs. Keir Starmer has this week been asked about “discussions” he had over taking employment with Mishcon de Reya in 2017, and he was paid while an MP (before becoming Labour leader) by the law firm. Others take one-off payments, such as for media appearances or writing articles.

The Labour leader set out his position on The Andrew Marr Show, saying that he believes former ministers and MPs should be banned from taking paid consultancy jobs. It is not entirely clear whether Labour still sticks by the 2019 manifesto pledge to stop MPs taking all second jobs (“with limited exemptions to maintain professional registrations like nursing”). And this fudge is not the only difficulty facing Starmer throughout the row. It can be tricky to draw a distinction between consultancy and other types of work; many would not recognise, for example, giving legal advice as clearly distinct from consulting. These challenges mean the ongoing argument over MPs’ conduct is not a straightforward open goal for Labour.