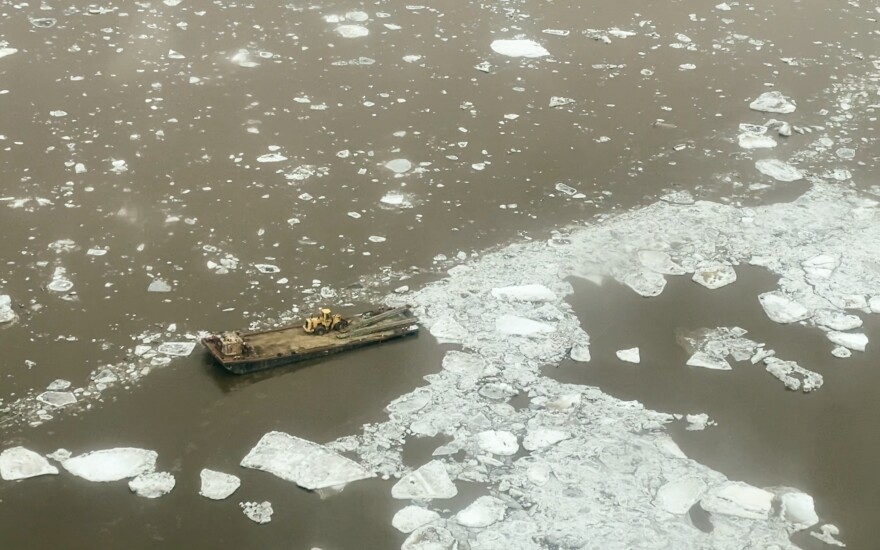 Last fall, Alaska Logistics left two barges to freeze in Yukon-Kuskokwim Delta rivers. One has dislodged and turn into a free-floating ghost barge, winding down the Kuskokwim River. It’s been caught on the Macivik Slough, just under Tuluksak, since May 10.

The ghost barge has a reputation. It’s referred to as The Lily. It traveled about 170 river miles down the Kuskokwim after dislodging from the ice when the river broke up at Georgetown on May 8.

“I dunno, it just kinda caught us,” mentioned Allyn Long, a co-owner and supervisor of Alaska Logistics.

Long mentioned he made the choice to let the Lily freeze into the river when ice began to kind round it in October 2021, and the barge’s accompanying tugboat skilled motor points. But he did take a few measures to safe it for breakup. His crew tried to brace the barge towards a sandbar, then they fixed the loader it was carrying to its high and pumped the barge stuffed with water to attempt to weigh it down and hold it from capsizing.

“We pumped about 15 or 20 thousand gallons of water into it,” Long mentioned.

But regardless of their efforts, the barge obtained free and the loader on high moved.

Willie Phillips from Tuluksak noticed it greater than 150 miles into its journey. He took a ship out for logging and noticed it on May 10 because it was passing the village.

“It seems like it shifted a little bit forward. The front area was lower than the back,” Phillips mentioned.

It moved previous the village and lodged right into a sandbar on the Macivik Slough. Other villagers alongside the Kuskokwim have been checking on it.

Someone in Akiak traveled up the river to take pictures of The Lily and posted them to Facebook.

“The likelihood of it getting out the mouth is very, very, very small. It’ll go aground somewhere. Probably even before, I’m gonna say, Napakiak. Yeah. That would be my guess. Somewhere down there, somewhere probably around Oscarville,” Long mentioned.

“We have our own tugboats and different friends that would help find it. People kind of on standby with fishing boats,” Long mentioned.

The Lily wasn’t the one Alaska Logistics barge to freeze into Y-Ok Delta rivers final fall. Another barge froze close to Eek, however they anchored that one, and it’s stayed in place.

In 2019, Alaska Logistics had one other barge freeze in place after which drift down the Kuskokwim throughout spring break up in 2020. That one traveled from Aniak to Bethel.

Long mentioned that his firm has been transferring freight by barge within the area for 20 years. He blames local weather change for making freeze ups and breakups “more dramatic.”

When Long left the barges to freeze into the rivers within the fall, the U.S. Coast Guard advised KYUK that they have been planning on doing an investigation to see if there was any wrongdoing on the a part of Alaska Logistics. The Coast Guard didn’t return telephone calls on May 12.