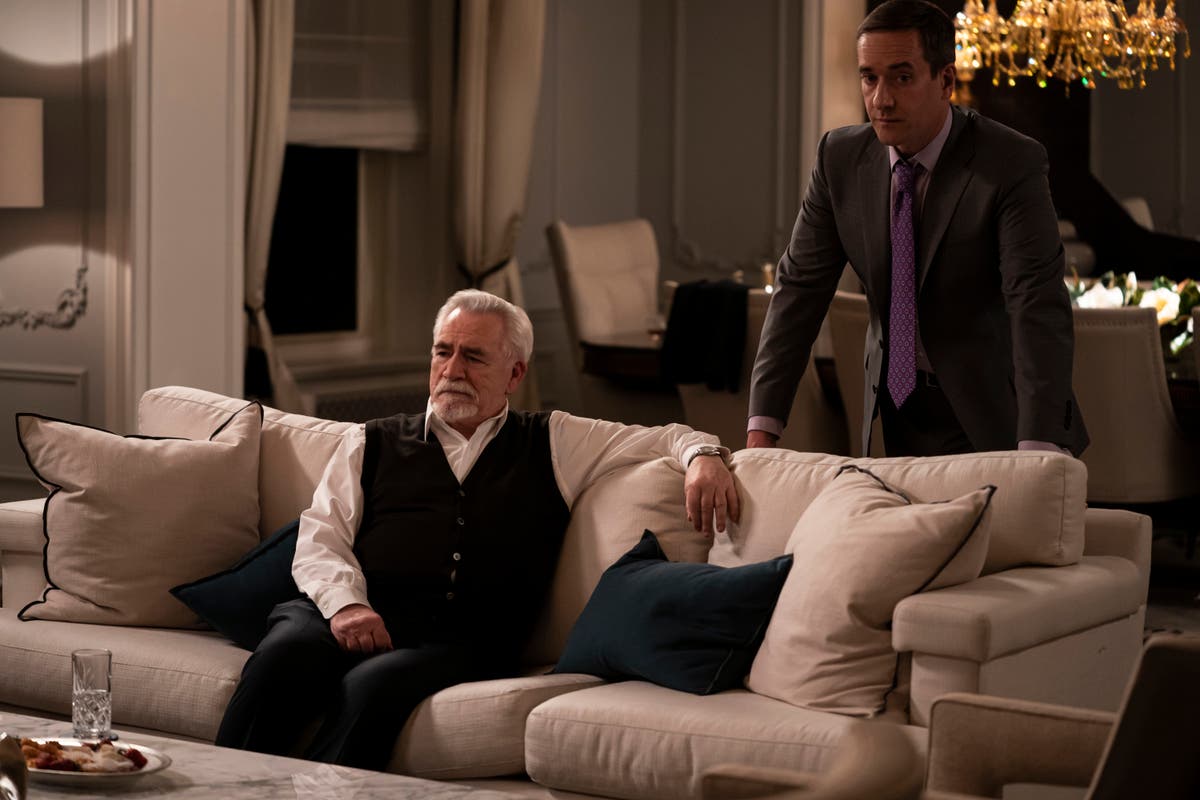 get the impression that Kendall Roy would not react well in a GCSE French speaking test. Why? Because the opening scene of Succession’s sixth episode proves that he is frankly rubbish at tedious role play scenarios. Ahead of his sit-down with the Department of Justice, Kendall (Jeremy Strong)’s team are attempting to help him prepare, feeding him some potential questions. “Got it, what’s next?” he crows.

Lawyer Lisa Arthur (Sanaa Lathan) implores him to be “humble” and “straightforward” in the interview, two adjectives rarely used to describe Kendall. She warns him that the case “isn’t a slam dunk,” as the Waystar papers aren’t quite as explosive as Ken made out. He channels his visible disappointment into becoming even more unbearable than usual, one minute acting like a petulant teenager (“I have the quote unquote best lawyer in town”) then like the passive aggressive boss from hell (“I really value all the work you do… but let’s try harder”).

Perhaps even more unforgivable is his ghosting of Greg (Nicholas Braun), who is bombarding him with worried texts about the precise nature of the “burning” that Kendall threatened him with last week (will it be a light toasting or more of a full-blown conflagration?). His messages are being sent from high altitude – those protracted negotiations about ditching Waystar’s fleet of private jets have come to nothing.

Fully recovered from his UTI-induced delirium, Logan (Brian Cox) is laughing at memes with his assistant, Kerry (why is it always so alarming whenever he does anything banal?) which Roman (Kieran Culkin) takes as proof that they’re sleeping together (“showing memes to a young menial? Tale as old as time”).

The Roy clan plus PR stooge Hugo (Fisher Stevens) are being borne through the clouds towards the Future Freedom Summit in Virginia, an exclusive gathering of uber-rich Republican party donors and political players. Top of the agenda is the question of who to endorse as the party’s presidential candidate – or more specifically, who will Logan Roy endorse, after ATN’s barrage of bad press prompted the current POTUS to refuse to stand for a second term.

With a background in politics, Shiv (Sarah Snook) is keen to take the lead – and to remind her dad of the role she played in brokering a deal at the shareholder meeting. “I’m just glad we still have a company… thanks to me,” she smirks. In the words of Logan, “get Shiv a f**king medal.” She’s dressed in a get-up heavily influenced by the Steve Arnott school of business-casual: a beige jacket and waistcoat combo worn over a short sleeved roll-neck jumper. It’s awful.

All of Shiv’s much-vaunted political experience was acquired working for the other side, and it’s clear that this confederacy of right-wingers makes her deeply uncomfortable, despite all her jokes about the event’s “Berlin bunker vibes.” Meanwhile aspiring President Connor (Alan Ruck) is thriving, high on the thrill of meeting some genuine ‘Conheads’ in real life; his girlfriend Willa (Justine Lupe) is furiously tapping out the script for the hotly unanticipated follow-up to her Broadway failure Sands. “I think what I realised is that I’m not that interested in being a commercial playwright,” she tells a lechy Republican bigwig later, prompting Connor to chime in: “The audience helped you figure that out, babe.”

Connor aside, who are the contenders for the top job? The obvious choice and safest pair of hands is Vice President Boyer, who has an unfortunate habit of licking his lips like a lizard, impossible to unsee once you’ve seen it. Then there’s Menken, an alt-right YouTube provocateur who trades jokes about gulags with Roman and seems to take being branded a fascist as some kind of twisted compliment. Finally, there’s Salgato, who “wants to bring traditional conservatism to a more diverse dialogue.” He immediately makes a play to get Shiv on side, proposing that if she gets her father to endorse him, he will repay the favour by… sending Logan to jail and leaving the path clear for her to skip all the way to the C-suite.

Despite his lofty plans to sue Greenpeace for defamation – and Tom (Matthew Macfadyen)’s reassurance that the summit is simply “a nice safe space where you don’t have to pretend to like Hamilton” – Greg does not initially thrive in this environment, not least because people with undercuts keep calling him a “soy boy.” Ever the naif, he’s aghast at the thought of big political decisions being made in such an undemocratic way. “You wanna call a referee, is there an ombudsman in the house?” Tom goads him, briefly transforming into Jeremy from Peep Show (god bless the Jesse Armstrong cinematic universe). The looming threat of future incarceration is weighing on Greg’s shoulders; Tom reveals his tactic is to think about jail all the time, so that any moment that he forgets to do so feels like respite.

A brief conversation between Roman and a “Brexit pervert” named Glynn reveals that Logan’s second wife Caroline (Harriet Walter) – aka Roman, Shiv and Kendall’s mum – has invited everyone apart from her children to her upcoming Tuscan wedding. She’s marrying a man named Peter Munion, who is very much not her long-term boyfriend, the “canoe-shaped gentleman named Rory.” Cue some furious Googling from Roman, which produces very little information other than that Munion is played by British character actor Pip Torrens.

Tom and Greg have a late-night rendezvous at a nearby diner, which Wambsgans reckons will help them adapt to the bland taste and textures of prison food. What a pair they make. Greg is worried that his “physical length” will make him “a target for all kinds of misadventure” inside. Tom, formerly known as “terminal Tom” in Waystar circles, has a new nickname. Now he’s “the Christmas tree,” because everyone is hanging their crimes upon him like “ornaments.” Would he be willing to let Greg “hook [his] bauble of corporate wrongdoing” on one of those “branches” to keep him out of jail? “Load me up, you piece of s**t,” he sighs. Is this… the nicest thing Tom has ever said or done?

Kendall’s interview with the DoJ goes as badly as expected. His fundamental mistake is to believe that everyone is as invested in bringing down his dad as he is. Unlike him, the DoJ employees aren’t on a pseudo-crusade, they’re just trying to do their jobs. Plus, there’s the fact that he came across, as Lisa puts it, “high-handed and defensive” then “over-familiar” and “glib.” Soon, Lisa is out of the inner circle, branded a “toxic person.” Talk turns to Kendall’s upcoming 40th birthday bash. The theme? “End times – Weimar meets Carthage meets Dante meets AI and antibiotic resistant superbugs.”

Everyone at the Future Freedom summit may, as Tom suggests, hate Hamilton, but Logan’s suite is now very much The Room Where It Happens, with everyone gathering post-mixer to get down to the real business of the day: deciding who to endorse. “Is Greg necessary?” Hugo asks as he lopes through the door. Logan decrees that yes, he is, if he keeps quiet. Each sibling makes their case for their preferred candidate, and Roman’s support for the “toxic” Menken has seriously riled his sister.

Kendall’s next move? Attempting to court Mr Christmas Tree himself. Meeting Tom in the diner of existential doom, he tries to lure his brother-in-law away from Team Logan with a promise of immunity in the DoJ investigation. “I have of late decided not to tarry too much with hope,” Tom sighs like a sad Shakespearean. Is he prepared to testify that Logan signed off on all the cruise-related wrongdoing in return for a get out of jail free card and, presumably, some kind of VIP party package for Kendall’s 40th? No deal.

Back at the hotel, talk turns to Connor’s presidential ambitions. “They’re all f**king weirdos anyway, so why not?” is one glowing endorsement from Roman, while Logan describes his eldest son as “smart… in his way.” Praise indeed. Before he’s banished from the inner sanctum, Greg turns defender of democracy and says what we’re all thinking. “I think I owe it to my country to say, I don’t think you should crown, or make, Connor President. That’s it. I’m sorry.”

Like a feudal lord, Logan starts summoning candidates to his hotel room so they can grovel for his favour. He even asks Boyer to bring him a can of Coke on the way. After catching Logan’s attention by brutally slagging off ATN (“status quo bedtime stories to maximise shareholder profit”) Menken meets Roman in the bathroom to talk tactics. Is he as fascist-y as he’s come across so far? Erm, yes. Does Roman care? Not really, and his dad seems to be on board too. When Shiv assures him that Menken won’t perform well in the current political climate, he hits back with: “I guess I’m a climate denier.” Probably in all senses of the term, given the prolific PJ use.

The next morning is an exquisite tableau of awkwardness. With Menken anointed as Logan’s political golden boy, he’s invited to pose for a family photo. Shiv refuses to join, until her father’s bluster wears her down. She agrees to be in the shot, but only if she’s not standing next to Menken. Once again, the episode closes with Logan praising his youngest son and pushing his daughter away. Advantage Roman, for now.

His M.O. may be erratic, but the youngest Roy boy can do no wrong in his father’s eyes at the moment. Clearly Gerri has schooled him well – although I’m not sure what she’ll make of him persuading Logan into backing a neofascist presidential candidate.

Roman’s ascendancy comes at Shiv’s expense, of course, and it’s p**sing her off. Last week, her dad publicly humiliated her after she struck a crucial deal; now he has dismissed her preferred candidate and forced her into mugging for the camera with a man she finds abhorrent. “You win, Pinkie,” he said after she refused to stand near Menken for the shot. That couldn’t be further from the truth – Shiv is on a real losing streak right now.

The fact that the Roys actually gave Connor’s presidential bid some serious(ish) consideration and didn’t dismiss it out of hand is a win for him. For a brief moment there, it seemed like Logan might back his son – it would hardly be the strangest decision he’s made of late.

Being fired from Kendall’s inner circle is surely a blessing in disguise, if only because it means no longer having to attend his superbug birthday party.

“You know they’re calling you the Christmas Tree?” Kendall tells Tom during their sneaky meeting. His brother-in-law’s response: “Maybe it’s because I’m tall and jolly.”

Succession is on Sky Atlantic, Mondays at 9pm and streaming on Now.