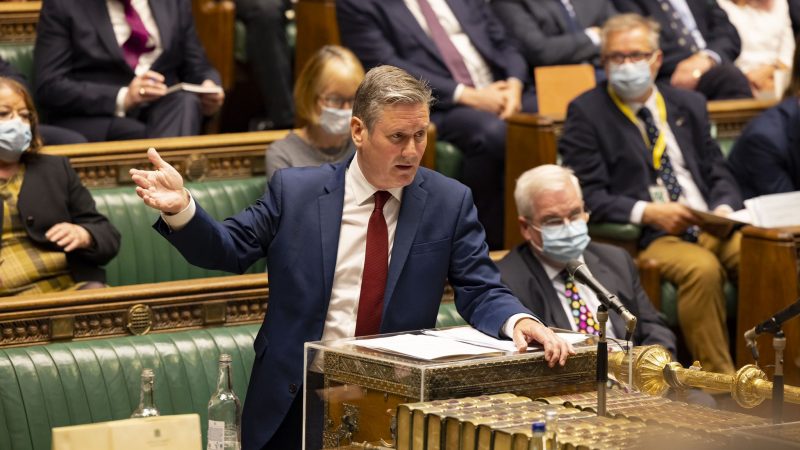 Keir Starmer has called on Boris Johnson to “answer for his mistakes, apologise to the country and take action to undo the damage he has done”, amid the corruption scandal prompted by the government’s chaotic handling of the Owen Paterson row. Now out of Covid isolation, the Labour leader is not simply leaving this fight to deputy leader Angela Rayner or House of Commons shadow leader Thangam Debbonaire: Starmer will be leading Labour’s response to the emergency debate in parliament himself today.

Starmer is not stopping at condemnation of the Paterson vote and reversal of the amended motion passed last week. Ahead of the debate, he has urged the Prime Minister to confirm that no MPs suspended from parliament will be nominated for a peerage, and highlighted the situation of Rob Roberts, the MP who was found to have sexually harassed a staff member but has returned to the Commons and been readmitted to the Conservative Party.

The Labour leader is also backing the drive to have this scandal translate to wider reform, confirming on the Sunday shows that he believes former ministers, for a time, and all MPs, while serving, should be banned from paid consultancy jobs. Grilled by Andrew Marr on this proposal, the only drawback identified was that the Shadow Attorney General currently works for a lobbying firm, but Starmer simply said he would not be allowed to do so if he were in government, which sounds pretty reasonable.

It is clear from The Guardian list of MPs who could be affected by a consultancy ban that this is overwhelmingly a Conservative problem – particularly men and particularly former ministers. That Chris ‘Failing’ Grayling is paid £100,000 a year to advise a port operator would make anyone wonder whether it is not just expertise that these MPs are providing. This kind of work is perfectly within the rules at the moment, as long as it is declared and not found to constitute paid lobbying – but that could change.
Sign up to LabourList’s morning email for everything Labour, every weekday morning.