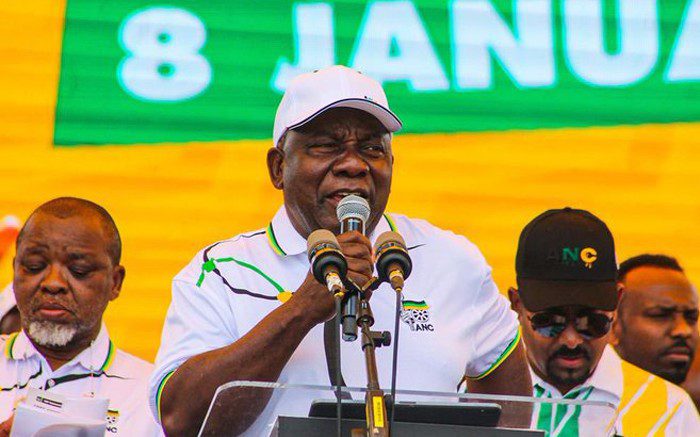 Johannesburg- A presidential advance security assessment team that undertakes security risk valuations ahead of the president’s arrival at venues is in the firing line following embarrassing security lapses that marred events of the ANC’s 110th birthday celebrations.

Sunday World has established that accountability is being sought from President Cyril Ramaphosa’s “advance team” amid deepening concerns over the security of the head of state.

On Friday, Ramaphosa and his deputy, David Mabuza, had to be whisked away following a power failure during the party’s gala dinner held at the Protea’s Ranch Resort outside Polokwane.

Drama ensued as the security detail of the country’s first and second in command had to escort Ramaphosa and Mabuza out of the venue shortly before dinner due to an electricity outage. Ramaphosa stayed in darkness for about 15 minutes and had to finish the latter part of his speech in darkness.

An ANC national executive committee (NEC) member said the advance team, which consists of members of state security and presidential protection services, should be taken to task for the lapses.

“This is embarrassing the president. The advance team had to make sure that the hotel complies with power regulations before the president and the deputy came here. This is pure embarrassment,” the NEC member said.

However, a senior member of the advance team said they had done the security assessment at the hotel.

“We tested everything. The generator was supposed to come on, but it did not. The way they left is how it should be. Where there is darkness, we don’t negotiate,” he said.

Adding to fears about lapses in security is the fact that several cabinet ministers were also present at the venue. Minister of Police Bheki Cele said that there was a deliberate interference with the electrical system at the Ranch.

“Everything was checked and when they went to the (electric) box, somebody had indeed interfered with the plug that only deals with the lights in the hall. The police are investigating and hopefully we are in the right direction.”

The general manager of the Protea Hotel by Marriott Polokwane Ranch Resort, Paul Shearer, said yesterday that the power outage had not been caused by load-shedding. Investigations are in full swing.

He said the advance entourage team of different members of Ramaphosa’s security detail had arrived at the hotel on Friday morning to inspect all security measures and technical matters.

“The event started at 7pm and the power cut happened at 9pm, two hours later. When this happened, the event was in full swing,” said Shearer.

Asked if there was any foul play involved, he said: “Foul play crossed my mind, and we are focusing on investigations. Our responsibility is to establish the cause. We want to resolve this matter as soon as possible as we have nothing to hide.

“This is for the first time such an incident has happened. We have back-up generators in place, but they [the generators] did not kick in. The power was off between 10 to 15 minutes, and the sensitivity around this really needs us to get to the bottom of this,” said Shearer.

Ramaphosa on Thursday had to abandon the Lilian Ngoyi Memorial Lecture in Lebowakgomo, leaving the venue without addressing scores of ANC Women’s League members.

The ANC and its women’s league said the event was not postponed due to security threats, but due to non-compliance to Covid -19 regulations.

The president’s Peter Mokaba Memorial Lecture in Polokwane’s CBD had to be delayed as ANC Youth League members demanded to be let in the John Botes Hall.

Minister in the Presidency Mondli Gungubele did not respond to requests for comment.

These incidents happened as security lapses were also blamed for the burning of the parliament building and the smashing of windows at the Constitutional Court.

SACP secretary-general Blade Nzimande said there was a link between last year’s July unrest and the burning of parliament.

“Much as we must give law enforcement agencies the chance to fully investigate the fire in parliament and the seeming vandalising of the Constitutional Court, the SACP strongly suspects that there is a connection between the July 2021 destruction and the latest events,” he said.

“There seems to be an attempt to create a picture that our government is weak and cannot defend our institutions of democracy.”

The ANC said in its January 8 statement that one of its priorities for this year would be to defend state institutions.

Ramaphosa said the democratic gains were being threatened by a concerted effort to destroy the institutions of the democratic state, erode the values of the constitution, and to undo the social and economic progress made.

“This worrying confluence of subverting actions is evinced by the blatant acts of state capture and criminality described in the report of the Commission of Inquiry into State Capture, the concerted campaign of public violence and destruction that took place in July last year, as well as ongoing acts of wanton theft, destruction and obstruction of vital public and private infrastructure, including communication and logistical networks,” he said.