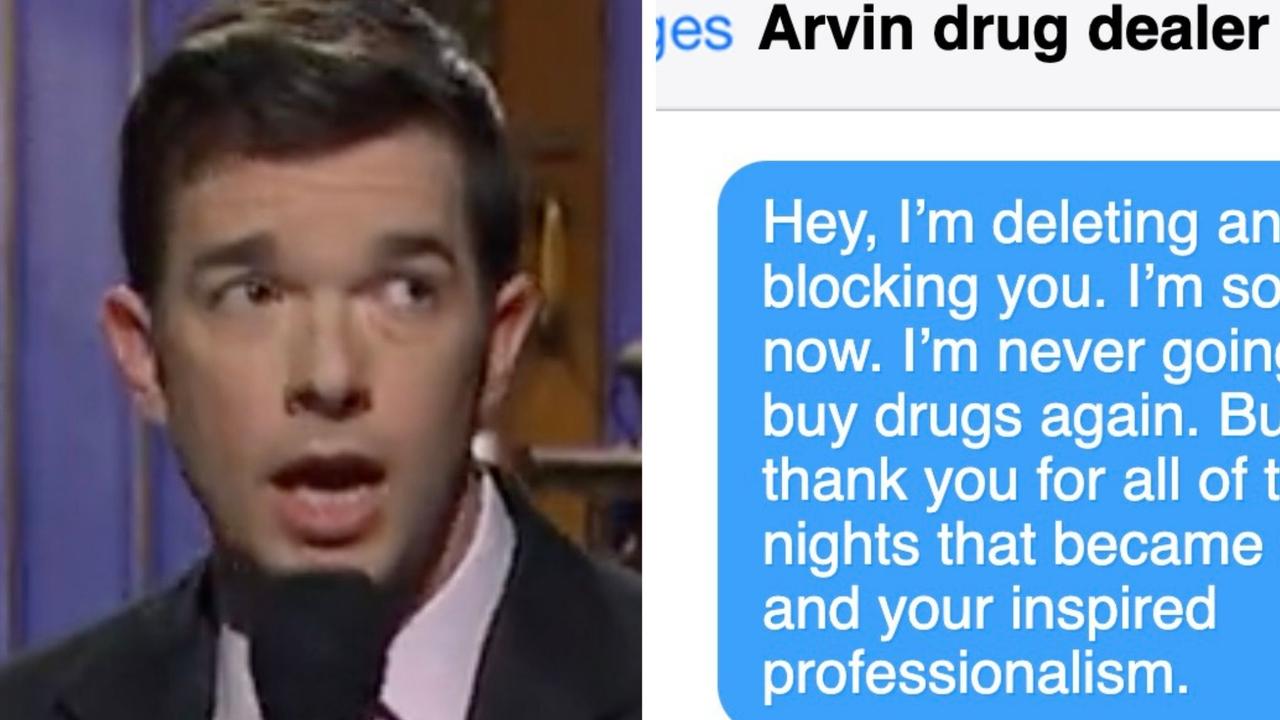 US comedian John Mulaney has revealed his truly bizarre text exchange with his “main drug dealer” during a wild opening monologue on SNL.

US comedian John Mulaney has exposed his bizarre text exchange with his “main drug dealer” during an opening monologue on Saturday Night Live.

The 39-year-old TV star, who was hosting the long-running show for a fifth time, detailed his journey to becoming sober and how his counsellor urged him to “break up” with his drug dealer via text.

“I’m polite, so I didn’t know how to end the text, so I was like, ‘But … Thank you for all of the nights that became days and your inspired professionalism.’”

Before Mulaney had a chance to block him, Arvin replied in the most unexpected way for a man who has just been sacked and presumably forfeited a lucrative revenue stream.

Mulaney said: “He texts me back, he goes, ‘Hey I’m so proud of you, I’m so happy that you got sober. I only bought drugs to sell to you because I was worried about you and I didn’t want you to get worse stuff off the street.’

“And I’m breaking up with this guy? So I can’t block him now, I text him back. I go, ‘Hey, oh my god you sweet man, you only bought drugs to sell to me? Did you sell drugs to other people?’ He said, ‘No.’”

Things took another weird turn from there, with Mulaney uncovering that Arvin was, in fact, not even a drug dealer.

“Ladies and gentleman, I have no idea how I know this person. There are many tales of drug dealers who have turned innocent people into drug addicts, I might be the first drug addict to turn an innocent man into a drug dealer.”

Mulaney has long been open about his struggles with addiction. Back in December 2020, he entered a rehab facility in Pennsylvania for 60 days for treatment for cocaine and alcohol addiction.

Following his time in rehab, Mulaney asked for a divorce from his wife of seven years, Anna Marie Tendler, in February last year. He officially filed for divorce that July.

Anna – who is an artist, photographer, and writer – commented via a spokesperson and said: “I am heartbroken that John has decided to end our marriage.

“I wish him support and success as he continues his recovery.”

A few short months later, in September, Mulaney publicly announced his rumoured relationship with US actress Olivia Munn, 41, and revealed the surprising news the two were expecting their first child during an interview on Late Night with Seth Meyers.

They welcomed a baby boy in December.

He added in his TV interview: “I didn’t want an intervention. At that moment in time, I wanted to continue using drugs.

“Sitting here tonight, I’m so grateful to you and to everyone there for saving my life.

“You guys saved me from drugs and Olivia and this baby have helped save me from myself and this early journey out of recovery. I don’t have a joke for that.”