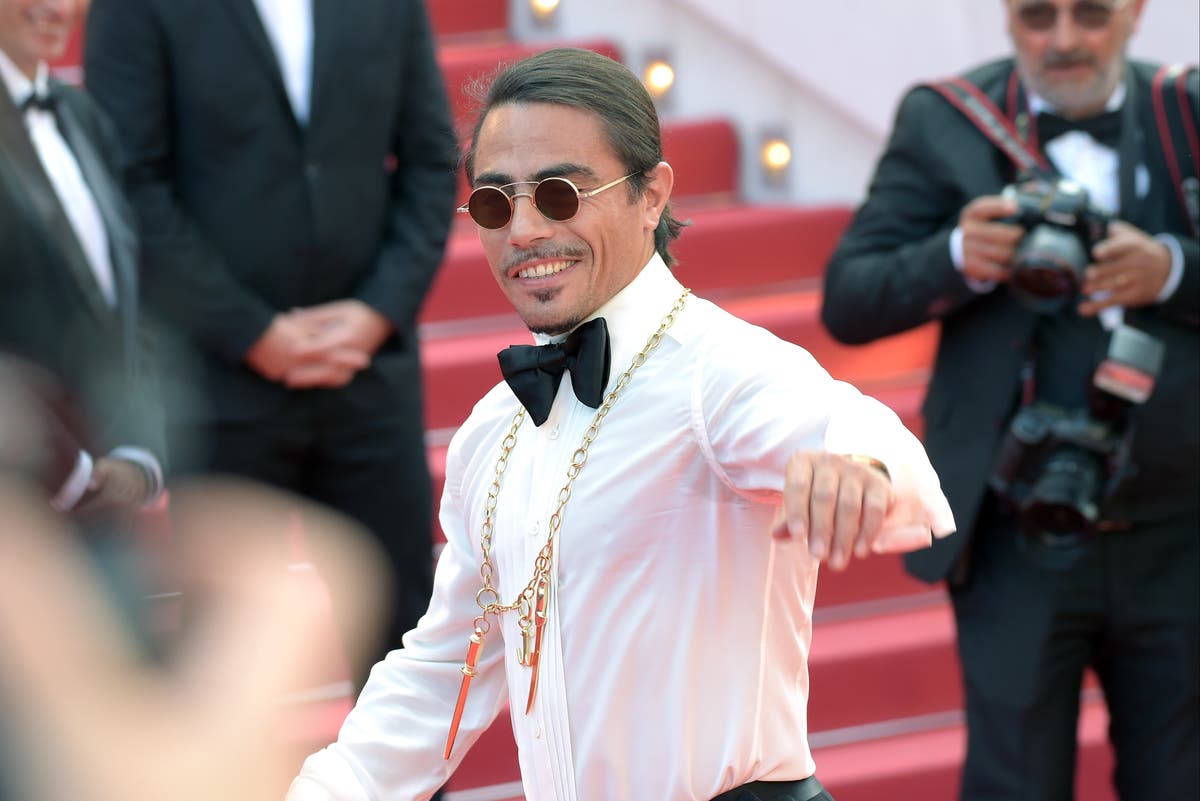 Perhaps between the crowds responding to his Instagram call out for people to come down with their CVs, I’ll catch a glimpse of the man. Former Ready Steady Cook chef Ainsley Harriott tells me there’s good reason to be excited about him. “Yeah boi! Met Salt Bae in Mykonos he actually cooked very expensive steak for me and did his customary sprinkling of salt which blew my son’s mind,” he enthuses.  TV’s Ching He Huang expresses similar sentiments, gushing about her own meeting with the butcher.  So, I am surprised to see no queues or crowds —in fact, there’s not a single person outside eagerly clutching their CV.

Maybe I’ve got the wrong day. I ask the doorman who tells me a few people had turned up over the three recruitment days, “maybe, over 20,” he says in a slightly higher tone that makes me think he’s exaggerating. “We have a lot of people coming to eat,” he adds. Indeed, I do spot a few well-heeled gentlemen entering, perhaps hoping to trade four figure sums for a golden giant tomahawk steak.

Huang isn’t so surprised at the apparent no shows. “There’s a real buzz in London, it is amazing to see places open and full. However, the industry is struggling to find good staff… everyone is experiencing a labour shortage,” she sighs. It seems not even Salt Bae, can escape that reality.

The doorman hands me a card with a recruitment number. “Call her and see what she says to you,” he says helpfully. I call her. It doesn’t even ring. I email and receive no response. Confused, I make my way back to the restaurant.  The manager Tomas comes out to tell me he can’t reveal any details about the recruitment drive, for fear of breaching GDPR details.

Defeated now, I email the generic talent @nusr-et address. I simply ask for some details about the process, I say I am a journalist wondering whether they are taking any more CVs. Again, no response. I am unclear whether this is deliberate evasiveness and perhaps the staff don’t want to admit the gap between Salt Bae’s digital hype and the physical reality of struggling to recruit staff for his new London restaurant is stark. Or perhaps they simply don’t have the staff to deal with my request.

There is a staffing crisis in London. The Office for National statistics this month release a report stating that the number of job vacancies between July to September was a record high of 1.1million in the UK. From July to September 2019 versus the same period in 2021 the number of vacant  jobs in the hospitality industry has increased by 38 per cent.  A combination of Brexit and Covid has seen workers return to their home countries and some furloughed staff have found jobs in other sectors. Kate Nicholls, the CEO of UKHospitality, an industry lobby group, tells me they are working with the Government to up-skill workers in the UK so they can plug the current gap.

In the meantime, restaurants are having to work hard to stay afloat. The open recruitment strategy may have been something of a last-ditch attempt for Nusr-Et as throughout the summer the restaurant advertised roles online and last week caterer.com re-posted a role for a “runner” at the restaurant, a job which involves running a meat cutting show, for up to £13.50 an hour, plus tips.  Tellingly, the advert says there’s the opportunity to get a recruitment and retention bonus of up to £1,000.

When I tell restaurateur Michel Roux Jr about Salt Bae seemingly struggling to find staff he, like Ching, seems unsurprised. It is a problem across the board.  “We are in the same challenging moment as everyone else.”

“Obviously with freedom of movement now gone it’s difficult to fill the available positions. I have applied for a sponsor’s licence which has come through but is very costly, time consuming and a bureaucratic nightmare. Things will eventually improve but it will take a long time,” he adds, straining for a note of optimism.

Having not found a single person eager for a job I leave the Knightsbridge premises feeling disappointed.

“Nothing is impossible,” Salt Bae tells his followers via his Instagram bio, alongside words encouraging them to reach out for “business opportunities”.  But it seems not even Salt Bae can glitter gold over the current situation. And despite his trite words, not everything is possible, including, it seems, finding enough staff to work in a hyped-up London restaurant.