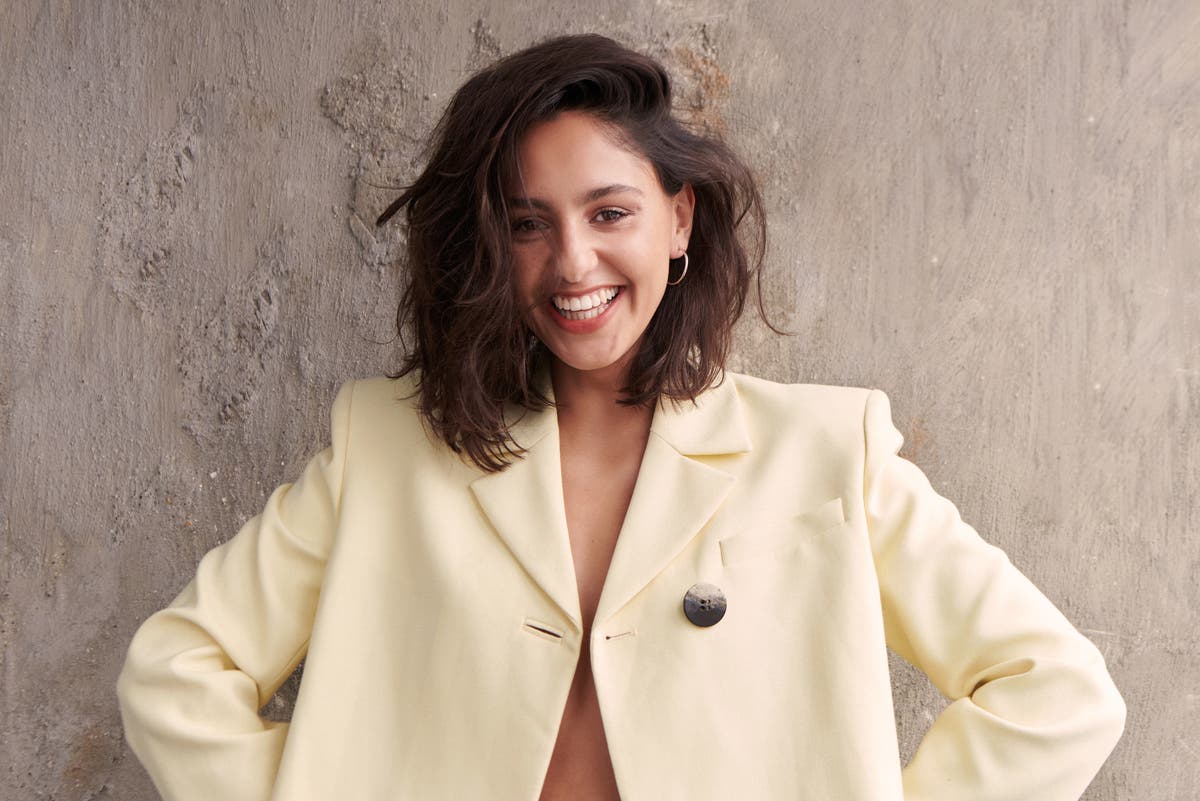 It’s really weird, because in a lot of ways, none of us should really be saying yes to this job, because we’re playing a stereotype, and I think a lot of us are very political,” says Rhianne Barreto, star of Stephen Merchant’s new BBC series The Outlaws. Indeed, at face value, she notes, her character Rani is “the Asian good girl,” a studious, sheltered Oxbridge candidate who has been hothoused by her protective parents — but from the show’s opening moments, that trope starts to unravel.

Rani, we soon learn, is something of a kleptomaniac.  “Everyone has their little secret that’s maybe not clean or golden — that’s hers,” Barreto says. “Most people are like, ‘yeah, I stole when I was young, from the sweetshop or a lipstick from Primark’ — I never did that! I remember once I was walking out of Tesco and I was like, ‘did I pay for this?’ I couldn’t remember if I paid for it, so I went back to be like, ‘can you check?’”

This shoplifting habit brings Rani into contact with a motley crew of fellow offenders (played by an ensemble cast that includes Christopher Walken, Poldark’s Eleanor Tomlinson and Merchant himself) forced to work together to renovate an old community centre in Bristol and complete 100 hours of community service each. “We’re archetypes so that we undo our archetypes… we’re paired off as offenders with people that would jar us in normal life, people we wouldn’t mix with in normal life, but who actually complete us,” Barreto notes.

Born in west London, the 23-year-old attended the National Youth Theatre and the BRIT School before breakout roles in the Amazon series Hanna and in the HBO film Share. She won the Sundance Film Festival’s Breakthrough Performance award for the latter, playing a teenage girl who wakes up after a night of drinking to learn that a video of her sexual assault has gone viral. Barreto was sitting “in the make-up chair” while working on ITV drama Honour (she starred as Bekhal Mahmod, thought to be the first woman in the UK to testify against her family in a so-called ‘honour killing’ trial, who helped prosecute her sister Banaz’s killers in 2007) when she received an email about Merchant’s new project, and landed the role after a few self-tape auditions and FaceTime calls.

That was nearly two years ago — she and her castmates managed 12 days of filming before a Covid-imposed shutdown in March 2020. During the lockdown, Merchant (“He’s like the patron saint of Bristol!”) wrote another season; since filming resumed last November, they’ve been working on “season one and season two together, jumbled up.” The Outlaws is a “singular” mish-mash of genres (it’s the sort of show that cuts quickly from a slapstick conversation about how to dispose of a dead badger to a scene setting up a major county lines drug deal) but Rani sits towards the dramatic end of the series’s comedy-drama continuum. “What people do to cope is really interesting, and I think if you’re isolated with really intense parents, you find a way to rebel,” Barreto says.

Her own family set-up couldn’t be more different (and not just because she is one of nine siblings — all of them have names beginning with ‘R’). “I was thinking the other day how insane it was that I not only thought I could be an actor [when I was younger] but that my parents allowed me,” she laughs, explaining how they all “realised at the same time” that she should keep performing after she landed a last-minute role in a primary school play (it was “an Oliver-My Fair Lady mash-up”; she was drafted because another pupil went on holiday unannounced and she’d already learned “the entire script”). Barreto’s parents didn’t have any industry connections or contacts, she notes more seriously, but their encouragement was vital. “I know so many people that wanted to act but have parents that were like, ‘go to uni, study something normal first,’” she says. “It happens [that way] to some people but it’s really hard if your mum isn’t famous to do that and then get in [to acting.]”

She is clearly passionate about working to remove the hurdles that can stop “normal, every day, working class people” from getting into acting — and about better, more meaningful representation on screen.  “The percentage of private school people in the UK in comparison to how many people are in [creative industries] — that’s absurd,” she says, before recalling how when she returned to the BRIT School after graduating, she “had so many young brown girls come up to me… being like, ‘I’ve never seen anyone like you in your career, at your level’… For me to be rare and like a shining light for them is sad actually, that they don’t have that representation. I’ve asked not to do best friend roles any more because I think it’s really important that unless it’s a f**king great role, brown or non-white people aren’t just playing the supporting lead so that big productions don’t get blasted for not being diverse.”

Now that she has finished filming, “moving back to London” is top of Barreto’s agenda; so is seeing her family (Covid protocols during filming have made visits difficult). She’s been “having a lot of thought about” directing too, whether that be in film or in theatre, to “make something interesting from my perspective,” she says. Watch this space.

The Outlaws is on BBC One, Monday at 9pm