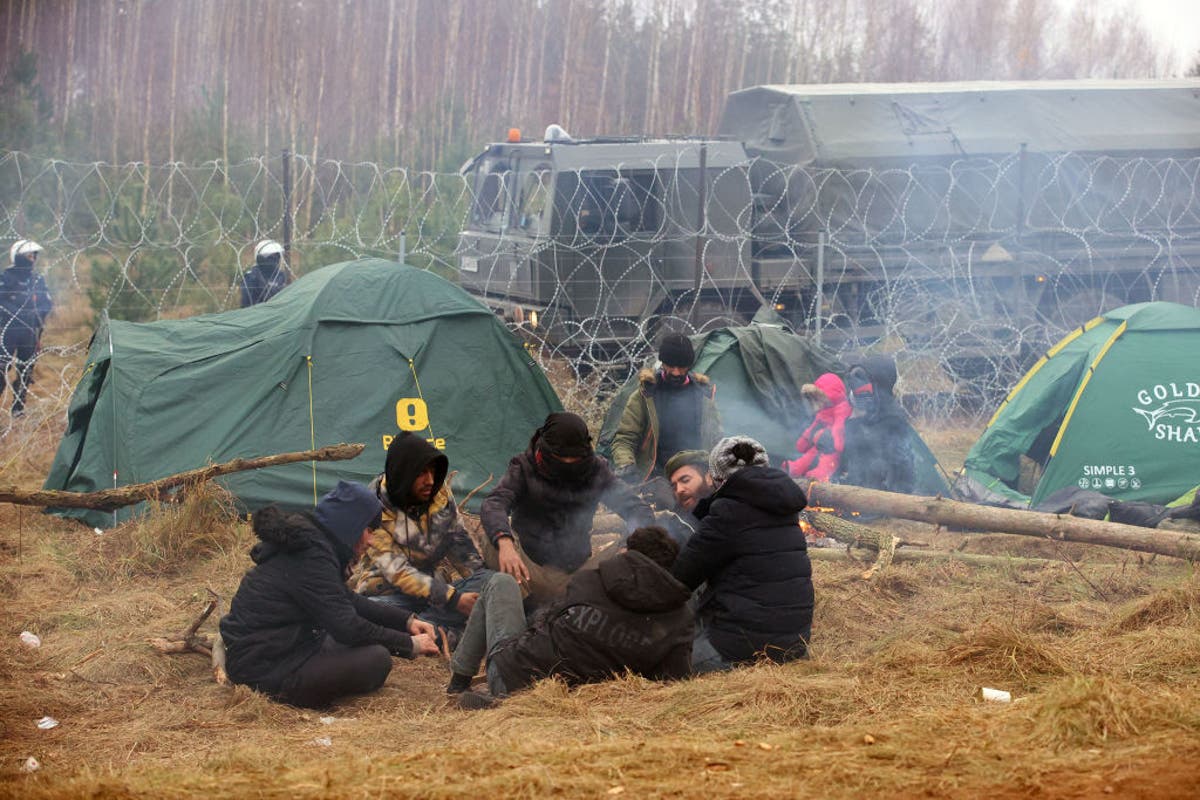 ladimir Putin dispatched two nuclear bombers to patrol Belarusian airspace on Wednesday in a show of support for its close ally, as tensions flared over the migrant crisis at the Polish border.

It came as the European Union accused Belarus of mounting a “hybrid attack” by pushing migrants across the border into Poland, paving the way for widened sanctions against Minsk.

Migrants from the Middle East and Africa trapped in Belarus made multiple attempts to force their way into Poland overnight, Warsaw said.

Polish authorities estimate that about 3,000-4,000 migrants have gathered along its border with Belarus, with hundreds concentrated in a makeshift camp close to the Kuznica crossing.

Warsaw has bolstered security at the frontier, where it has declared a state of emergency.

She said: “These hundreds of men, women and children must not be forced to spend another night in freezing weather without adequate shelter, food, water and medical care.”

The EU has accused Belarus President Alexander Lukashenko of encouraging migrants from the Middle East to travel to his country and sending them towards Poland, Lithuania and Latvia in retaliation for economic sanctions imposed on his regime.

Belarus denies the allegations, but has said it will no longer stop migrants and others seeking to enter the EU.

“From a distance, these events on the Polish-Belarusian border may look like a migration crisis, but this is not a migration crisis, it is a political crisis triggered with the special purpose of destabilising the situation in the European Union,” said Polish Prime Minister Mateusz Morawiecki.

Steffen Seibert, a spokesman for German Chancellor Angela Merkel, said that Minsk is engaged in “state-run smuggling and trafficking … happening 100 per cent at the expense of the people who are lured into the country with false promises.”

Chancellor Merkel held a phone call with Mr Putin on Wednesday in a bid to ease the crisis. “I asked him to exert his influence on President Lukashenko, because people are being used here,” she said.

Meanwhile, Mr Lukashenko and Mr Putin have pinned the blame on the EU.

Moscow accused Europe of failing to live up to its own humanitarian ideals and trying to “strangle” Belarus with plans to close part of the frontier.

The Kremlin claimed it was unacceptable for the bloc to impose sanctions on Belarus over the crisis.