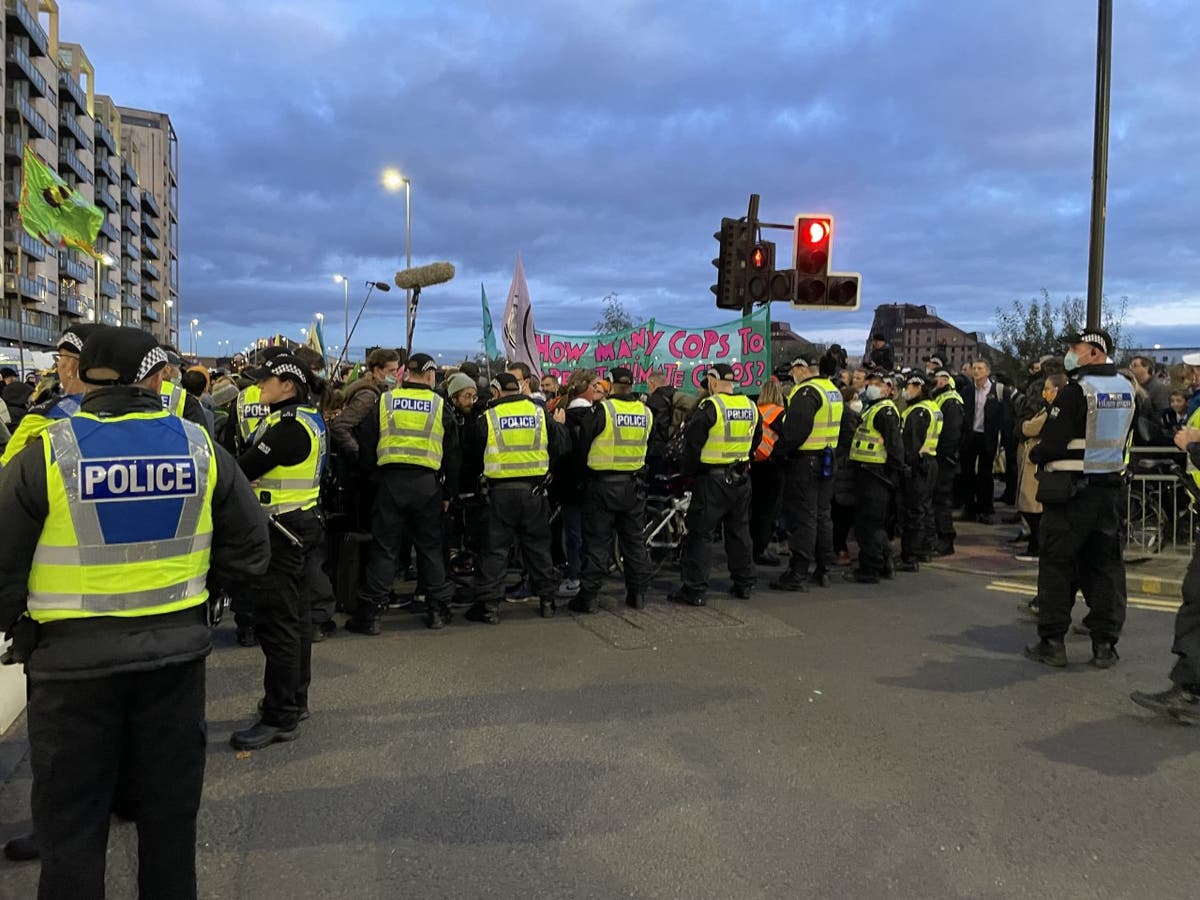 undreds of protesters converged on Glasgow on the second day of the world leaders summit at Cop26.

Extinction Rebellion activists held a number of protests in the city, including outside the global UN climate conference venue.

Around a hundred protesters gathered in the area and were temporarily prevented from crossing the Clyde Arc bridge before being escorted on by dozens of police – where some staged a sit-down.

They then began to cross, as officers guarded the buses which had been forced to wait for the group to move on.

One Extinction Rebellion campaigner, Luca Trivellone, 27, from Italy, said: “We all know Cop26 has already failed before it even started.

“We are expecting emissions to rise instead of net zero by 2030. We are never going to get there.”

In the morning, protesters dressed as Joe Biden Xi Jinping, Boris Johnson and Emmanuel Macron, along with eight other world leaders, and played a series of four children’s games in a Squid Game-themed demonstration.

Andrew Nazdin, the director of the Glasgow Actions Team, who organised the event, demanded that more be done to stop climate change, and added that the “time for climate games is over”.

“World leaders need to agree a plan to keep warming well below 1.5 degrees Celsius and put up money to fund a just transition across the global south,” he said.

The hit Netflix programme Squid Game follows a heavily indebted gambler who is competing against hundreds of others in a series of children’s games in an attempt to win a huge pay-out.

Malcolm White, of the Glasgow Actions Team, dressed as Prime Minister Boris Johnson, took part  in the games opposite the Scottish Event Campus (SEC), where global leaders are trying to thrash out a new climate deal.

“We’re here playing the Squid Game in order to highlight that the climate leaders are playing games with the planet,” said the 34-year-old.

“They’re here, they’re using lots of rhetoric, but they’re not actually, so far, engaging with the discussion process at the level which we think is in keeping with the climate crisis we are all facing.”

At one point Vladimir Putin and Joe Biden could be seen tussling with the inflatable Earth as protesters wearing boiler suits watched on in front of a sign that urged them to “stop playing climate games”.