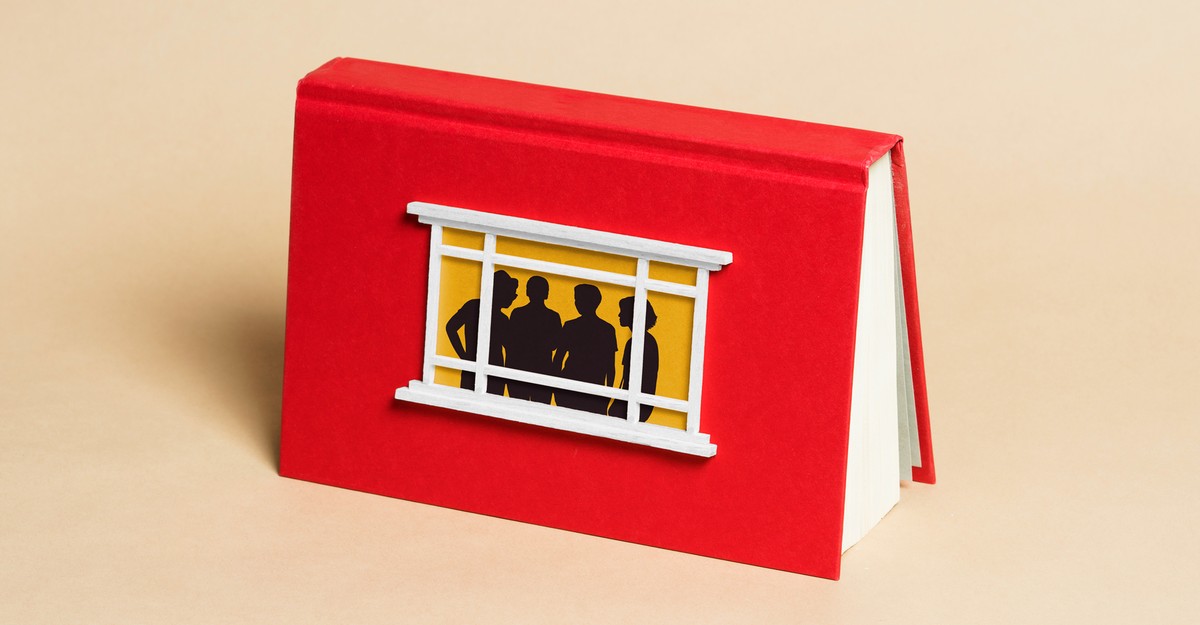 The group biography has been around for centuries: There was Plutarch’s Lives of the Noble Grecians and Romans, written some 1,900 years ago and a staple of classical education ever since; the Bishop Gregory of Tours’ sixth-century biography of the four distasteful sons of the Frankish King Clovis I; a swarm of medieval hagiographies that bind together the lives and miracles of saints. In addition to being foundational to the biographical genre, modern group biographies are excellent sources of historical trivia, ideas, and, happily, gossip.

The questions that make these biographies sing—what makes this group of people actually interesting, not just noteworthy? Why, of all the relationships in a life, were these so particularly influential?—take real searching to answer. To read a good group biography is to come out with a different level of appreciation for the ways, trivial and tremendous, that humans influence one another.

The canon is overwhelmingly white and Eurocentric, and can tend toward an understanding of history in which educated people’s conversations are uncritically seen as the engines behind progress. The influence of hagiography—which today colloquially refers to an exaggerated celebration rather than a straightforward recounting—remains clear, especially when there’s less space to get into each individual’s unflattering traits. And yet: These books’ joys are really something. Here are nine animating, searching, and interrogative titles with which to start.

The Immortal Evening: A Legendary Dinner With Keats, Wordsworth, and Lamb, by Stanley Plumly

Seeking Romantic-era trash talk? Stop here first. Plumly, a poet, adopted an unusual structure for this thoughtful look at not only John Keats, William Wordsworth, and Charles Lamb, but also a cast of luminaries including Samuel Taylor Coleridge, the egotistical but mediocre painter Benjamin Robert Haydon, and the essayist William Hazlitt. The book tells the story of a London dinner, hosted by the forever impoverished Haydon and attended by the other central figures, and spins their intertwining stories out from there. It’s a compelling, accessible introduction to the highly flawed personalities behind an artistic movement that continues to exercise broad influence, and it finds a way to movingly humanize its characters. In both their achievements and their personal failings, the Romantics tend to stand larger than life. In Plumly’s vision, they are simply people whose attunement to the world and one another created a filigreed intimacy—intricate, beautiful, and liable to break.

The Three Mothers: How the Mothers of Martin Luther King, Jr., Malcolm X, and James Baldwin Shaped a Nation, by Anna Malaika Tubbs

Alberta King, Louise Little, Berdis Baldwin: Their sons became voices of generational significance, figures so great that the extent to which their genius was tied to the specific influence of their families and communities can be overlooked in popular imagination. That representation, Tubbs shows, is a disservice not just to the work of those men—it’s easier to dismiss ideas imagined to come from a lone reformer than those understood to have deep communal roots—but, crucially, to the women who raised them. In Tubbs’s treatment, those women are worth knowing foremost for the work that they made of their own lives, not their sons’ achievements. Very different from one another, with different struggles and different joys, the “three mothers” embodied and deliberately conveyed to their children the qualities that made them notable: resilience, a clear-eyed view of injustice, and a fierce commitment to equality.

Think of Cape Cod today, and the first word that comes to mind is unlikely to be radical. But the New England enclave, now associated with well-heeled vacationers, was, in the first decades of the 20th century, a center for artistic and political progress. Edna St. Vincent Millay rubbed elbows with associates of Emma Goldman; the artist Helen Frankenthaler and the novelist Mary McCarthy each had romances with the acerbic critic Clement Greenberg. Among the who’s who of people now enshrined as American greats were a slew of characters no less noteworthy for being less well known: Dodie Merwin, a committed admirer of Ralph Waldo Emerson who became a center of Cape social life; Nina Romanov, a Russian princess in exile; Mardi Hall, an artist and a host of elaborate parties; and more. Altogether, the milieu on the Cape—the famous and their forgotten companions alike—built a world of perpetual creative ferment, a hub from which great trends in art, philosophy, and politics spread to the rest of the country. Williams gives an expansive and alluring account of the Cape’s heyday. You’ll wish you could have been there.

Sisters of Mokama: The Pioneering Women Who Brought Hope and Healing to India, by Jyoti Thottam

In 1946, six nuns from Kentucky arrived in the small northern Indian town of Mokama with plans to found a hospital. India, already suffering from the brutal effects of Partition, was in the middle of a public-health crisis. Around that time, 158 of every 1,000 newborns were dying in their first year of life, disease was rampant, and a staggeringly insufficient number of doctors tended to the population. Sisters of Mokama follows the Mokama nuns; the crew of women who came to staff their hospital, called Nazareth; and the generations of nurses they trained—including Thottam’s mother. They each became a small but significant part of the story of how India moved forward from the dire conditions that marked the onset of its independence, and particularly the story of how Indian women found new opportunities in their radically reshaped country. Although the six nuns who began the venture are at the heart of Thottam’s story, she extends equal curiosity and compassion to all the women who passed through Nazareth in its first two decades. The hospital still stands today.

Fatal Discord: Erasmus, Luther and the Fight for the Western Mind, by Michael Massing

The central duo in Massing’s opus make a natural pair. Both were intellectual radicals during the political, religious, and artistic upheaval of the 16th century, an exceptionally unstable time, but the two could not have differed more in their approach to gaining influence. The younger Martin Luther began his volatile career as an admirer of the diplomatic Erasmus of Rotterdam, only to decide that the older man’s ideas were too cautious for the demands of their time. Luther’s choice to pursue outright rebellion reshaped Europe and pushed his one-time intellectual lodestar out of the historical limelight. In some ways, it’s a classic story of conflict between an elder statesman and a young upstart. But with Massing’s deft touch, it becomes a fresh reflection on the ways in which the great shifts of history are both capricious—so much so that a single malcontent can set them in motion—and the foreseeable recurring function of human restlessness.

The Saigon Sisters: Privileged Women in the Resistance, by Patricia D. Norland

Under French colonial rule in Vietnam, a small group of Vietnamese girls were educated in lycées, French secondary schools, alongside the daughters of the colonial elite. As revolution approached and American interference escalated, many had the option to leave their home country and escape the violence. Norland tells the stories of nine who chose to stay, and who, after spending their childhoods secretly dreaming of Vietnamese independence, found surprising ways into the resistance. She also tells how, after the end of the Vietnam War, they came to reconnect. In the end, they found, the privileges they experienced as children helped teach them the importance of the fight they would come to join. Their small group became its own source of revolutionary ferment: The sense of patriotism felt by each fueled the others, and set them on their extraordinarily courageous paths. “We concluded,” one said, “we had to have our own revolution.”

Also in need of a revolution in their home country, but born several decades too early: The 132 French women, convicted of crimes as small as eating a stash of consecrated hosts in a time of scarcity, who were involuntarily sent to America’s Gulf Coast in 1719. Only 62 survived the journey, finding themselves on arrival in territory that, having been billed as resource-rich and ripe for development, was challenging in the extreme and sparsely dotted with French settlements. Yet the women found in their new surroundings opportunities that would have been impossible in France. They worked, married, and built the foundations of communities such as Mobile and New Orleans, forging bonds with one another along the way. Their lives became early examples of the American dream, and of its violence. Some of the women enslaved people. Others became involved in conflict between French settlers and Native American tribes: Some lived on forcibly seized Native land; some were taken captive and treated as pawns in the ongoing colonization; some lost family to the fight. In their previously little-known stories is a concise picture of all that makes U.S. history remarkable and troubling.

Read: So you want to write a presidential biography

Black Fortunes: The Story of the First Six African Americans Who Survived Slavery and Became Millionaires, by Shomari Wills

In 1848, a man named William Alexander Leidesdorff died with a fortune of more than $1.4 million, the equivalent of at least $38 million today. What makes that news historically unusual: Leidesdorff, who passed as white for most of his life, was Black. Wills traces the stories of how Leidesdorff and his peers managed to accrue wealth both before the end of slavery and during the Reconstruction era, when Black people faced intense and sometimes deadly persecution, and wealthy Black people made for particularly prominent targets. In those stories, he finds reasons for celebration, including a meaningful model of a civic-minded approach to wealth—many early Black millionaires channeled huge shares of their fortunes to advancing racial justice—as well as a significant share of injustice and tragedy. As the economic legacy of slavery continues to manifest, both in decreased wealth for Black households and baseless myths maligning Black people as inherently incapable of gaining wealth, Wills’s book is a reminder of how intensely and persistently American fortunes have been connected to the machinery of prejudice.

Akenfield: Portrait of an English Village, by Ronald Blythe

The first thing to know about Akenfield is that it doesn’t exist: It’s the pseudonym that Blythe bestowed on the East Anglian village he warmly and painstakingly portrays in this book. In giving the real place a made-up name—one thought to be a portmanteau of the names of other nearby villages—Blythe nodded to the novelistic quality of his narrative, which falls somewhere between a classic group biography and an oral history, but is rife with the vivid pleasure of daily interactions more commonly found in fiction. Blythe, who grew up in that region and spent time in the 1960s taking down the memories of his former neighbors, saw the result as a travelogue, while others considered it a work of anthropology. To read it as a biography of both a place and its people reveals other depths. Treated with the right care and knowledge, everyday people—farmhands, laborers, medical workers, one stray poet—appear as vibrant in their lives, relationships, and contributions to the world as their more glamorous peers. Akenfield drops readers into their histories and relationships, offering a rare sense of the breadth of any given life.

​​When you buy a book using a link on this page, we receive a commission. Thank you for supporting The Atlantic.