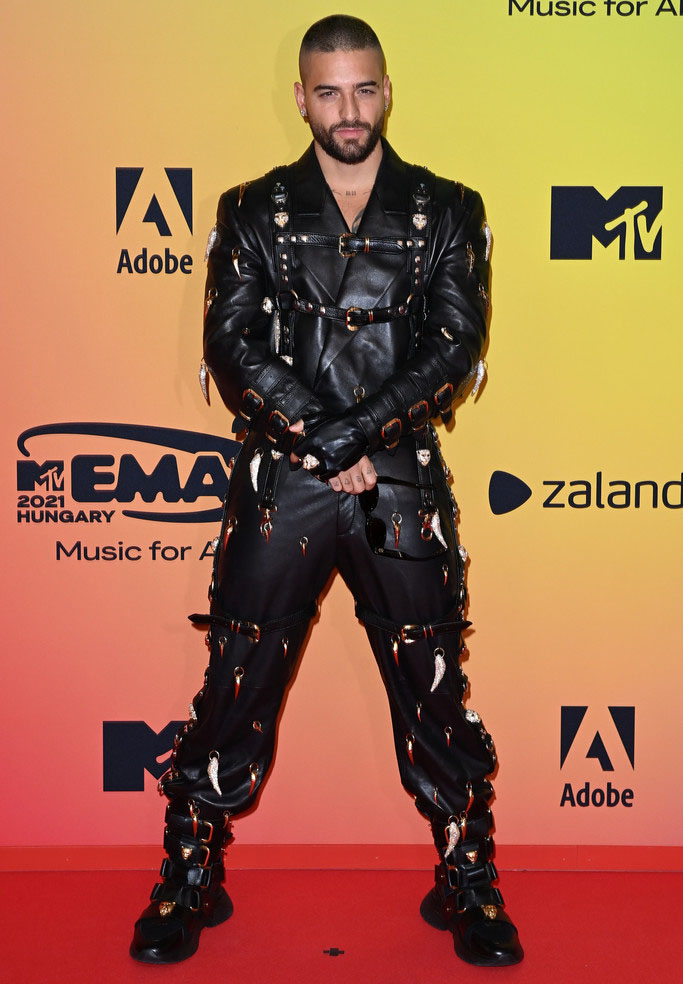 Here is a roundup of the men who suited up for the red carpet this week.

I must start with Maluma who wore a custom Roberto Cavalli look for the MTV EMAs.

There is a lot going on with the buckles and lucky charms, but if anyone can pull this off it was Maluma.  He seems to love a heavy-duty leather look, and the MTV EMAs was the right place for this.

Nicholas Hoult attended the LA premiere of ‘The Great’ alongside his co-star Elle Fanning wearing an Alexander McQueen Pre-Fall 2021 look.

I love how the hybrid bomber jacket and tailored tuxedo trousers with tonal satin detailing bring a sharp sense of dynamism to his red carpet look which is amped up with the Alexander McQueen ‘Worker’ boots.

Nicholas may have the perception of always presenting “prince charming” looks, but he will often serve up something unexpected like this, and I’m so here for these moments when executed as perfectly as this.

Billy Porter was in fine form at the ‘House of Gucci’ New York premiere wearing a Palomo Spain Spring 2022 look which saw him looking sharp while dressed for the cold climate.

We can’t have a Billy Porter look without a touch of drama which is where the fringed detailing comes in.

Many of you haven’t warmed to this La Greca print, but I think the warm earthy tones will sell this look to you on this occasion.

When it comes to the Christian Louboutin Motok white leather lug sole boots, I admire the fact that he didn’t play it safe with black, but the brown shoes on the runway prove to be the better choice with this suit.

Ozuna and his love for Dolce & Gabbana continues to pay dividends, as the entertainer looked very sharp in this custom white tuxedo.

His Dolce & Gabbana black velvet loafers with adornments added that touch of flare I was expecting from him.

Kodi Smit-McPhee presented a very clean and effortless profile in Celine for Deadline’s The Contenders Film presentation of ‘The Power of the Dog.’

Mahershala Ali attended the premiere of this new film, ‘Swan Song’ wearing a striped Louis Vuitton suit which was giving me mafioso vibes.

I was missing this usual sharpness, as the trousers are a tad too long and the button is pulling on the blazer.

I can’t say I’m a fan of the print on the tie either.

This is just ok by his usual high standards.

We earn a commission when you follow the link to make a purchase.