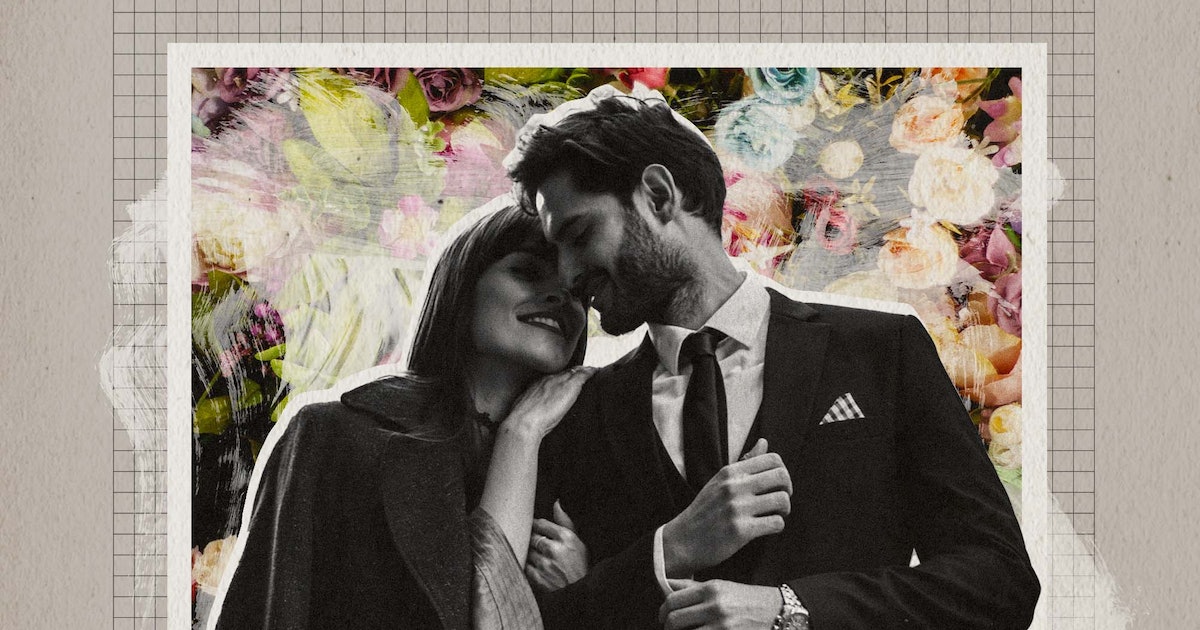 For Cassandra*, the concept of marriage feels limiting and unnecessary. The 30-year-old nonprofit worker says they take issue with the way nuptials pressure people into forming legal unions for the sake of accessing certain economic and social privileges. Their partner Drew* also made it clear early on that his feelings were mutual. Watching his parents get divorced and then remarried three or four times each had soured him on the whole idea. But, about two years into their partnership, he felt the need to clarify: Saying no to marriage didn’t mean he didn’t want a long-term relationship.

Cassandra, fortunately, was on the same page. Once they were able to confirm those intentions to each other, it was smooth sailing. Fast-forward to the present, and the two have been committed for seven years, moved in together, and share three cats. According to Cassandra, the two intend to be together forever — just without the paperwork.

And they aren’t the only couple choosing to forgo exchanging vows. According to statistics, marriage rates have been declining fairly steadily for the last several decades. According to a report from the National Center for Health Statistics, the United States in 2019 hit its lowest marriage rate — six marriages per 1,000 people — since the government began tracking this data in 1867. Another recently released Pew Research Center analysis of U.S. Census data found the share of adults between ages 25 and 54 who have never been married jumped from 17% in 1990 to 33% in 2019, and the number of adults who are currently married dropped from 67% to 53% in that same time period.

Now, these trends don’t necessarily mean everyone is intentionally bucking marriage — many of these unmarried and unpartnered folks do still aspire toward marriage one day, and many experts attribute the declining marriage rates to the increasing inaccessibility of marriage for low-income and marginalized people.

At the same time, attitudes around marriage are changing. A 2017 Pew report found one in seven people who’ve never been married don’t want to at all, and another 27% aren’t sure if they want to or not. Meanwhile, a 2019 Pew report found about 6 in 10 people think cohabiting couples can raise kids just as well as a married couple can, and most don’t believe marriage is essential for a fulfilling life. Among those who currently live with a romantic partner, 24% say they don’t want to get married.

On a large scale, social, cultural, and economic pressures to get married have significantly eased over the last century, says licensed marriage therapist Anna Dow, LMFT. That’s in part because of the way gender roles and expectations — in particular for women — have changed and evolved.

“Now that women are able to attain financial independence and gender roles are being shaken up at their very foundation, antiquated marital arrangements are no longer necessary,” she explains. “Traditional marriage is still an available option that many people find desirable and fulfilling. At the same time, we’re more free in regard to how we can each choose to live and love than ever before in human history.”

Choosing To Be Together, Sans Obligation

There are many reasons why couples might choose not to get married, even if they intend to be together for all their lives.

When Rachel*, a 45-year-old writer in Atlantic City, first met her boyfriend Arthur** in 2012, he was in the middle of getting divorced. The process of formally ending that relationship was unnecessarily arduous — it took about two years — which is one of many reasons Rachel isn’t interested in getting married: She doesn’t want to sign onto the many legal rules around it.

“I don’t really want someone else involved in my business, whether I stay together or don’t stay together [with someone],” she explains. “We joke about it, but we also are serious about it. We say to each other somewhat often, ‘You can leave anytime.’ And I mean, I think it would be pretty devastating if one of us just walked out, but at the same time, I think we both feel like we want to make sure the other person is there because they want to be there, not because they signed a piece of paper that’s complicated to get out of. I don’t think either of us want to be in a relationship where the other person feels like they’re obligated to stay.”

While some people might find security in making a lifelong oath to each other, people like Dow — who, despite working as a marriage therapist in California, has personally opted out of marriage with a long-term partner she has been with for 13 years — actually finds comfort in the way she and her partner are constantly choosing each other again and again.

“My personal favorite thing about opting out of the church or state reigning over my relationships is that I feel assured that [my relationships are] actively being chosen due to presently offering high value to both me and my partner(s),” she says.

Dow hadn’t always been on board with abstaining from marriage. She’d introduced the idea of nonmonogamy about two years into her relationship with partner Reavis, but getting married was still something she’d had her eye on. About five years into their relationship, though, Reavis shared with her a desire to shift their relationship even more radically: He no longer wanted to live life as a “we,” which to him meant continuing to share a committed loving relationship while opting out of the traditional dynamic of living together, sharing finances, making major life decisions together, and otherwise integrating their lives. That included, of course, opting out of marriage, too.

This was a monumental shift in their relationship that took many months of open communication and, for Dow, some significant soul-searching. Specifically, she says she had to spend time intentionally unlearning many of the dominant social narratives about love and expectations around how relationships are “supposed to” progress. People often experience societal pressure to ride the so-called relationship escalator, she explains, referring to a term coined by journalist Amy Gahran describing the traditional trajectory relationships are expected to take. “If we don’t intentionally decide to get off that metaphorical escalator, we can get propelled into typical expectations like getting married, having kids, or buying a house, whether those decisions are truly the best options for us or not.”

Over the next two years, Dow and Reavis transitioned to a different way of being together. Today, she’s convinced their current dynamic — which involves living in separate mobile homes that they park near each other often as well as aspects of polyamory — better fits their personalities and desires. “There was a time in my life when I felt that it indicated a lack of commitment that my long-term partner didn’t want to get married,” she says. “After attending many weddings over the span of our 13-year relationship of people who are already divorced, I no longer feel that way.”

For Cassandra, opting out of marriage just supports a degree of independence that feels more comfortable for them. They and their partner Drew are also nonmonogamous, and being able to experience things individually and have separate lives has felt really satisfying.

“I don’t want that to go away. Not that I think marriage would get in the way of it, but I just don’t like being attached to anything,” they explain. “The mental and emotional idea of committing to one person for the rest of my life is fine because I’ve already done that in my brain, but I do not want to sign the same piece of paper as they do.”

Rachel and Arthur have been together for about 10 years now, nine of which have been spent living together. Their lives are deeply intertwined: They recently bought a house together, they’re in each other’s wills, they have supported each other through family death and emergency room visits, and currently they’re in the process of trying to start a family.

“There’s been a lot of steps that I think a married couple would also take that we’ve taken,” Rachel says. “Especially the longer we’re together and the more we go through things, I feel just as committed as I think someone who would be married would feel.”

When she first met Arthur, Rachel had already known she wanted to settle down with someone for the long term — but even still, she’s never been interested in getting married. Her parents are divorced, so marriage has never been particularly important to her. She understands why a couple might enjoy the comfort they get from making a public commitment to each other, but everyone she knows already understands the level of commitment between her and Arthur. The longer they’re together, she says, the less useful it seems to get married.

“All the things that I think in my mind a [spouse] is, I already [am],” she explains. “I just can’t really think of anything that would change for me getting married in terms of how I take care of him or he takes care of me or the commitment we’ve made to each other. I just don’t really see a reason to do it, and I feel like we have been through a lot of wonderful things but also a lot of trials and health issues — that’s the commitment.”

Taking Issue With The Institution

Most of the couples TZR spoke with for this story didn’t have strong moral opposition to the general idea of marriage, and many acknowledged that it can be a great choice for many. For some, it’s simply relieving to have other people — especially older, more traditional folks — be able to easily understand the depth of your relationship with just the words “husband,” “wife,” or “spouse.” That said, many of the people interviewed took issue with the dominance of the institution of marriage — and the social pressures that are often upheld by it. “It’s a really flawed institution that sort of creates a dependency on it on purpose, and I don’t like that,” Cassandra says.

For example, Cassandra is considering getting a domestic partnership with their partner Drew so they can get on his health insurance. “I don’t want it to come to this. But I need health insurance, and I don’t want to pay hundreds of dollars a month for it,” they say. “It’s a flawed institution because it forces you to do sh*t like this. Health insurance is tied to either marriage or employment, and divorce laws are such dog sh*t. … Like you’re marrying for health insurance, and you’re not necessarily going to be in a great relationship if that’s [why you’re getting married], and then you’re trapped.”

Both Cassandra and Dow also point to the marital institution’s ties to patriarchy and capitalism as key reasons for choosing to avoid it. “During the Enlightenment era of the late 18th century, the narrative of marriage shifted from being a financial arrangement, in which women were essentially sold as property, to being about love,” Dow explains. “Nonetheless, remnants of those antiquated arrangements can still be found in modern-day wedding rituals like fathers giving daughters away, women vowing to ‘love, honor, and obey’ their husbands, and couples taking men’s family names.”

Doing What Feels Right Is Crucial

At the end of the day, deciding to get married is a very personal choice — and that’s the point. It’s a choice.

For some people, marriage isn’t necessary to embark on a lifelong commitment, and their relationships feel perfectly rich and secure without it — if not more so.

“I think your end goal should just be being happy with your partner and having a support system within each other and a really, really nourishing relationship,” Cassandra says. “The goal shouldn’t be marriage. The goal should be a long-term relationship that you want to be in.”