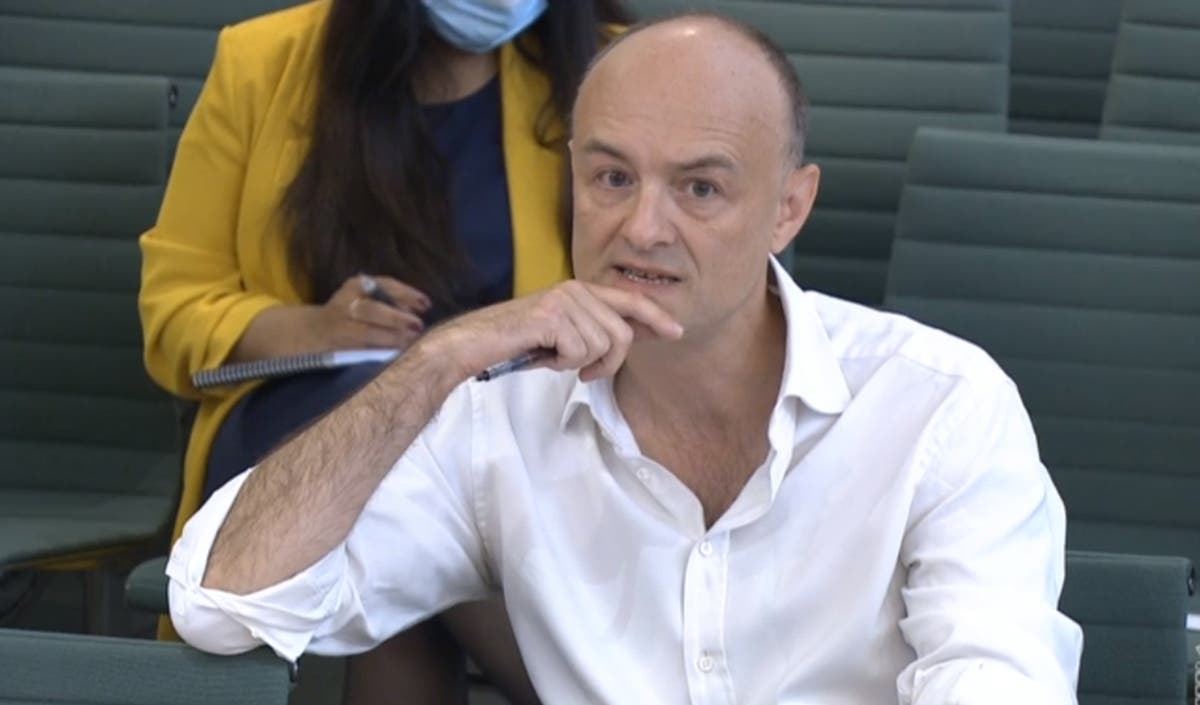 RITAIN is heading for another hung Parliament with the Tories losing much of the Red Wall, Boris Johnson’s former top aide has warned. Dominic Cummings, inset, who resigned last autumn, says the most likely election scenario is one where neither Boris Johnson nor Sir Keir Starmer wins a conclusive victory.

“Boris is stalled and isn’t going anywhere, but Starmer has absolutely no message of any kind … and is clearly a dud, so you can imagine a situation where at the next election the Tories lose a lot of the Red Wall, Labour kind of recovers enough to get rid of the Tory majority,” Cummings says. At that point, he claims, Johnson is “dead,” before adding: “If he’s even there by then, which is by no means guaranteed.”

In typically forthright language, Cummings also took aim at Johnson’s wife Carrie and hit out at a culture of fear among advisers close to the Prime Minister. “Overall it’s obvious that all the energy and drive has gone and Boris is surrounded by courtiers terrified to say anything to him in case him or his girlfriend executes them,” Cummings told writer Andrew Sullivan’s podcast.

But don’t expect a return to the political frontline from Cummings just yet. Asked what he’s doing at the moment other than writing his Substack, Cummings replied he was “hanging around reading and talking to people”. Nice life if you can get it.

An 89-year-old has used a hunger strike to put pressure on the Government over Nazanin Zaghari-Ratcliffe, the UK citizen being held in Iran. Last night Margaret Owen, a former human rights lawyer, finished six days without food.

Owen had planned to continue, but was urged to stop by Zaghari-Ratcliffe’s husband, Richard, who ended his own three-week hunger strike outside the Foreign Office last week. “He begged me yesterday, he said please stop,” she told The Londoner. Owen has noticed the effects today. “I’m feeling very wobbly today and I haven’t slept at all well” she said. “But I was very careful to drink lots of water.”

Owen feels the Government should take more responsibility for the international issue. “What really frustrates me is that Liz Truss is not just Foreign Secretary, she’s minister for Women and Equalities too,. Owen said. Zaghari-Ratcliffe has been held in Iran since 2016 on spy charges, which she has always denied.

Owen hopes the the public keep putting pressure on Boris Johnson over Nazanin . “I think we need another rally for Nazanin. I think there is a movement starting now. People need to write their MP” Owen said.

Gill’s skinny dip leaves her all at sea

A TOUGH weekend for journalist Flora Gill, who was caught in a rip tide while swimming on holiday. “Luckily two lifeguards and a dog saved me,” wrote Gill, daughter of former home secretary Amber Rudd and the late Sunday Times restaurant critic A.A. Gill. “Unluckily I was naked so everyone watched as they dragged me onto the sand like a titted beached whale.” Gill, inset, was visiting a nudist beach for the first time, and said: “It feels like nature’s way of telling me to keep my kit on.”

Self’s giving up on life in the fast lane

WILL SELF has tried to explain why he keeps “getting nicked for speeding”. But the erudite novelist has done so as only he can. “Over these 15 largely car-less years I’ve lost my feel for the road,” he writes in the New European. “A feel that involves a considerable amount of semiotics, such is the integration between signifiers and velocity in the contemporary vehicular realm.” Now, though, he says realising the “sheer pointlessness of speeding” has changed him. Self aware.

CYNTHIA ERIVO hosted the Black British Theatre Awards last night, with stage stars at Old Finsbury Town Hall including Kobna Holdbrook-Smith, Miriam-Teak Lee, Beverley Knight and Mzz Kimberley. On Saturday, Reggie Yates and director Aml Ameen were at BFI Southbank for a screening of Pirates. Yates has told us about his love of peppermint tea: “If I’m writing, Jesus Christ I am inhaling the stuff.” The glamour of film.

NIGEL FARAGE has got a new gig working for the latest celebrity video-messaging platform. The ex-Ukip man now works on Thrillz “exclusively”. He charges £74 per message — an inflation-busting rise on the £63 he was available for on Cameo. Farage calls himself “Mr Brexit”. At least someone’s making money from it.

BEYONCE and British politics make for unexpected bedfellows. But eagle-eyed sleuths spotted some choice political books next to the US superstar as she posed on Instagram recently. The Londoner likes to think once Beyoncé’s shoot was done, she devoured the nearby copy of Life in the Jungle, Michael Heseltine’s autobiography.