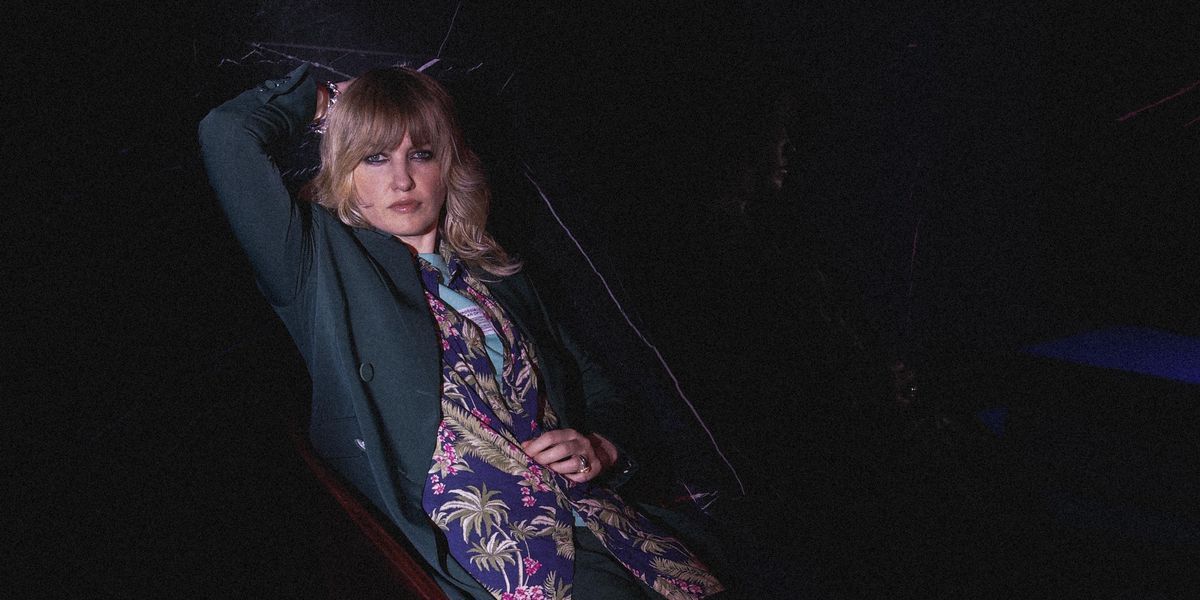 In order to create Ladyhawke’s new album, Time Flies, the indie icon — whose eponymous 2008 debut is still a classic — needed to live a full, complicated life. Real name Pip Brown, the New Zealander got married to actress Madeleine Sami and gave birth to their daughter, Billie Jean, in 2017 — a gift that, unfortunately, led to severe postnatal depression, coupled with an existing skin cancer condition, and longstanding clinical depression and anxiety.

She’s since been able to see a complete recovery — thanks to a balance of therapy and medication — which set her up for an entire albums-worth of material to reflect on. “I was feeling pretty grateful to be alive and making music, so I felt like I didn’t ‘care’ anymore — not in a bad way, I just stopped overthinking it,” Brown says, speaking to the freedom she experienced this time around (unlike 2016’s Wild Things or 2012’s Anxiety).

If her last two albums were reactionary, as a result of burnout or sobriety, Time Flies is Brown’s “rebirth” — especially after lockdown and climbing back up after hitting the bottom. “I realized I needed help,” she says of her choice to begin therapy in 2019. “Last year I changed my whole life. I decided to try medication for the first time, and it turned everything around and made me feel like I haven’t in a long time. My mum said she hasn’t seen me like this since I was 17.”

So Brown rallied a crew of old friends from Sydney (Nick Littlemore, Jono Sloane) and London (Pascal Gabriel), as well as new collaborators like Tommy English, Jeremy Toy and Josh Fountain, to write and record Time Flies over Zoom. Together, they dove deep and tackled everything from motherhood to mental health and queer love, all packaged with the ’80s-inflected alternative gloss of Ladyhawke.

Between lead singles “Mixed Emotions” and “Guilty Love,” featuring BROODS, Brown leans happily into her strengths, building warm, fuzzy tracks with big choruses that sound like they’ve been in your life forever (Much like “My Delirium”). Then, there are hooky bops that beg for a light-up, disco dancefloor — like “Think About You” and “Walk Away” — that highlight Brown’s willingness to let loose and go even more pop than ever before.

So while life certainly flies by, packed with tremendous highs and low, arriving at the other end a more developed person can feel really good — and in Ladyhawke’s case, it sounds really good, too. Below, Brown gives PAPER a track-by-track breakdown of her latest Ladyhawke effort, Time Flies, available everywhere today.

“My Love” I wrote about the feeling of being taken for granted, not listened to, ignored and how that sort of love can fuel a fire inside. It’s an upbeat song with a darker undertone. I wrote it with New Zealand producer Josh Fountain out of his studio in Auckland.

This was another song I wrote with Josh. In this one I was playing with the idea of limerence, infatuation and the desperate desire for it to be reciprocated. So I decided to make the fantasy come true: the infatuation is mutual almost as though I manifested it myself.

“Time Flies” I wrote in one of my first sessions back in LA with producer Tommy English. I used to live in LA for a number of years and remember flying back into LA from NZ for the first time since moving home to New Zealand. I had this intense feeling of nostalgia, so wrote the song as an ode to being back in LA.

“Mixed Emotions” I wrote with Nick Littlemore and Jono Sloan of Empire of The Sun. They’re both very old friends of mine from Sydney and this was the first time we’d worked together for years. The song is about the rollercoaster ride you can go on in relationships, the ups and downs, turmoil, breaking up and getting back together.

“Guilty Love” was written in LA with Tommy English and Georgia Nott of BROODS. When we all sat down in the studio to start writing, we got into a big discussion about religion and realized we’d all grown up going to Catholic school. Georgia and I started swapping stories and realized we’d both been messed up in different ways by the teachings. I remember Georgia jumping up and saying, “We have to write a song about Catholic guilt.” So that’s exactly what we did.

“Take It Easy Mama,” I wrote with LA-based Australian producer Chris Stracey. I wrote the song as a proper ode to hard-working mums everywhere, including my own. I’d just been through post-natal depression after having my daughter and some days felt so hard. This track was my way of acknowledging that and all the things mums go through.

“Loner” is another track I wrote with Josh Fountain. This song is about knowing you’re loved and knowing you’re surrounded by friends who care, but still feeling desperately sad and lonely. It’s something I feel like everyone who’s suffered from depression or any kind of mental illness can probably relate to, and something I’ve felt in my life on and off for as long as I can remember.

“Adam” is a song I quite literally wrote about my dear friend, Adam. He was my tour manager for a number of years and is like a brother to me. He worked with me during some of my darkest times in my struggle with drinking, but he always looked after me and had my back through all of that. This was written with Tommy English in LA.

Another track I made with Tommy English, “Reactor” is a cheeky dig at an egomaniac man who vies for a girl’s attention, but to his complete shock she’s not attracted to him at all. She sails right past him, in fact, into the arms of her true love (definitely another girl).

“Walk Away” is another track I wrote with Josh Fountain in Auckland, New Zealand. This is a pretty straight-up cheeky song about being attracted to someone and the thoughts that go through your head: wondering how they perceive you, what impressions you’ve had on them.

“Love Is Blind” was written with Tommy English entirely over Zoom during the first big COVID lockdown last year. We sent ideas back and forth, then talked over Zoom and figured the track in its entirety. This is another relationship song, this time a slightly sadder angle, apologizing for being distant and withdrawn, not entirely present and how it affects the other person.