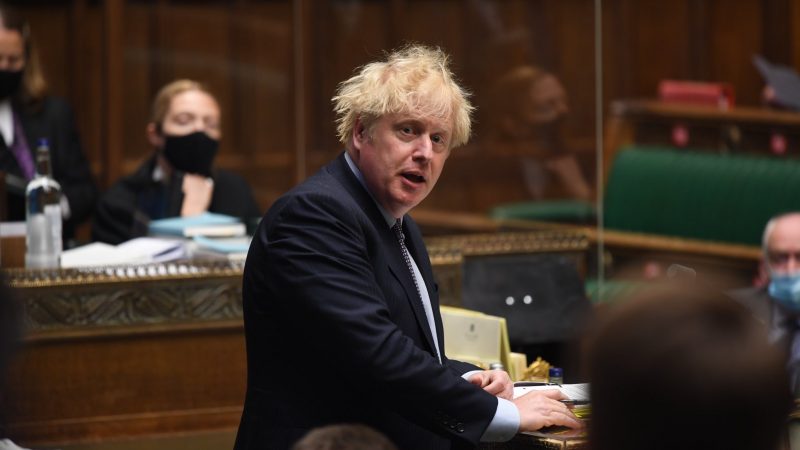 Boris Johnson’s net favourability rating has dropped to its lowest recorded level yet amid continued allegations of sleaze and Conservative backbench discontent with the Prime Minister, according to polling by Savanta ComRes.

Net favourability among the public for the government, in general, has fallen as well from -12 last month to -16 this month, which is also the lowest ever result since the pollster started its political tracker in May last year.

The low rating coincides with a second consecutive Labour lead in the Savanta ComRes poll, which found that 38% of voters (down two points on last month) would back the Labour Party compared to 36% who would support the Tories.

According to Electoral Calculus, the two-point lead would result in Labour returning slightly more MPs to the Commons than the Conservatives, but would still leave Keir Starmer’s party short of a majority.

The organisation also highlighted that due to proposed parliamentary constituency boundary changes, however, the narrow lead for Labour recorded this afternoon would actually translate into the Conservatives being the largest party

Savanta ComRes political research director Chris Hopkins warned that while the polling today should be seen as “good news” for the opposition party, the drop in Conservative support “tends to be going ‘nowhere’ rather than directly to Labour”.

“Conservative voters are not abandoning the party for Labour, nor are Red Wall voters appearing to return to Starmer’s party, and while his own favourability and ‘best PM’ ratings are at best static or, at worst, also dropping, it’s difficult to envisage a Labour Party ready to take advantage of continued Conservative blunders,” he said.

“Waiting for the Tories to screw things up has felt like Labour’s strategy for almost 18 months and now, presented with an opportunity, there’s nothing to suggest in this polling that they’re ready, or trusted, to take advantage.”

Today’s poll comes amid the ongoing row over social care after the government announced a controversial change to the way in which its care costs cap would be calculated, leading to accusations that Johnson has broken a key manifesto pledge.

Under the social care policy announced by ministers earlier this year, it was thought that any care costs incurred would count towards a new £86,000 limit, at which point the state would step in as proposed by a report shelved a decade ago.

But a vote on Monday means that only costs paid by an individual will qualify. The government will not account for any means-tested help received from the state, making it likely that only richer people will reach the cap.

According to analysis by the Labour Party, a person with assets worth £100,000 will now contribute 80% of their wealth to care costs. The party has argued that this means those individuals would “almost certainly lose their home” as a result.

The plans for the social care costs cap, described by Keir Starmer in Prime Minister’s Questions earlier today as a “working-class dementia tax”, will affect households in the Midlands and the North of England worst.

The low favourability ratings also follows the Owen Paterson row, during which Johnson was heavily criticised for supporting the backbencher found guilty of an “egregious” breach of lobbying rules, and the debate over MPs’ second jobs.

The Guardian reported this morning that frustrations are growing in the Treasury at No 10’s handling of recent political decisions, following a series of mismanaged announcements, backbench revolts and Johnson’s speech to the CBI.

A number of Conservative MPs have submitted letters of no confidence to 1922 committee chair Graham Brady. Reports suggest that as many as a dozen may have done so. 54 are required to trigger a no-confidence vote in the Tory leader.