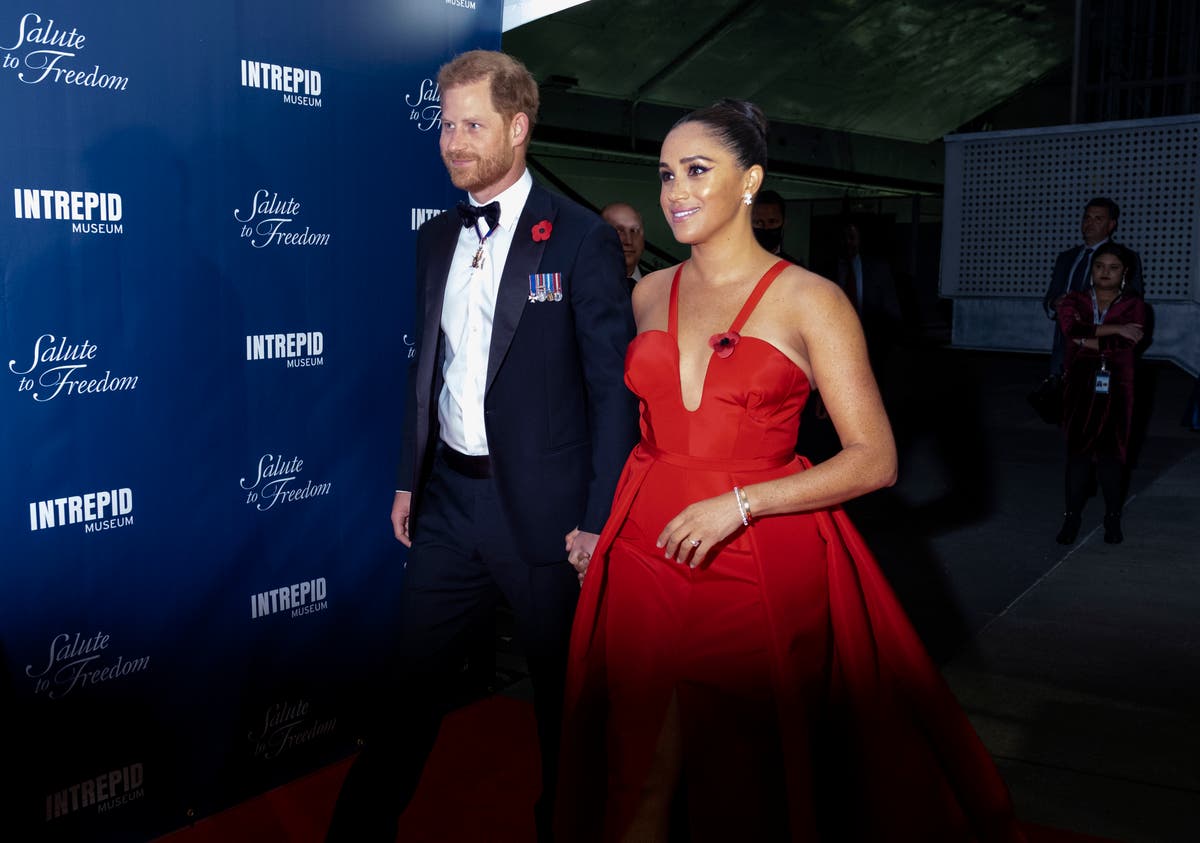 arry told a New York gala honouring veterans that he was living the “American Dream” after a recent ride in a car shaped like a hot dog.

The Duke and Duchess of Sussex attended the 2021 Salute to Freedom gala, held on the eve of Veterans Day in the US and Armistice Day in the UK, and praised the “value” of service members and their families.

Harry wore black tie, his medals and the cross of the Knight Commander of Royal Victorian Order and Meghan a red gown, while the pair adorned their outfits with a poppy.

The duke presented Intrepid Valor Awards to five service members, veterans and military families, and he spoke of how his military experience shaped the person he is today.

My experience in the military made me who I am today, and I will always be grateful for the people I got to serve with – wherever in the world we were

He told the audience at the Intrepid Museum: “It’s wonderful to be back on USS Intrepid a decade after my last visit – and a lot has changed since then. Just last week, I went for a ride on the Oscar Mayer Wienermobile – how’s that for living the American dream.

“I’ve lived in the US for close to two years now. I have to say, witnessing your support for all those that put themselves in harm’s way in defence of our freedoms and liberties – it’s remarkable and hugely respected.

“It reminds me of the deep reverence us Brits have for our military as well. The armed forces communities in both our countries share a special bond, and I’m grateful to have served in support of our joint allyship for many years.”

Harry served in the military for a decade and had two tours of Afghanistan, and has organised the Invictus Games for wounded and injured service members and veterans since 2014.

He added: “As we honour and reflect on Remembrance Day in the UK, which shares a date tomorrow with Veterans Day here in the US, my hope is for all of us to continue to support the wellbeing, and recognise the value of, our troops, veterans, and the entire military and service family. We and they are better for it.

“I served 10 years in the military, including two tours of duty in Afghanistan – one as an FAC (Forward Air Controller) on the ground and in the dust with some of you, another as an Apache helicopter pilot in the air supporting and talking with you.

“Nothing was more valuable than the time I got to spend with my soldiers in a shell scrape, eating an MRE (Meal, Ready-to-Eat) in the back of a tank, thanks for the swaps, flying a mission overhead knowing those below were safer, or making each other laugh when it was needed the most.

“My experience in the military made me who I am today, and I will always be grateful for the people I got to serve with – wherever in the world we were.”