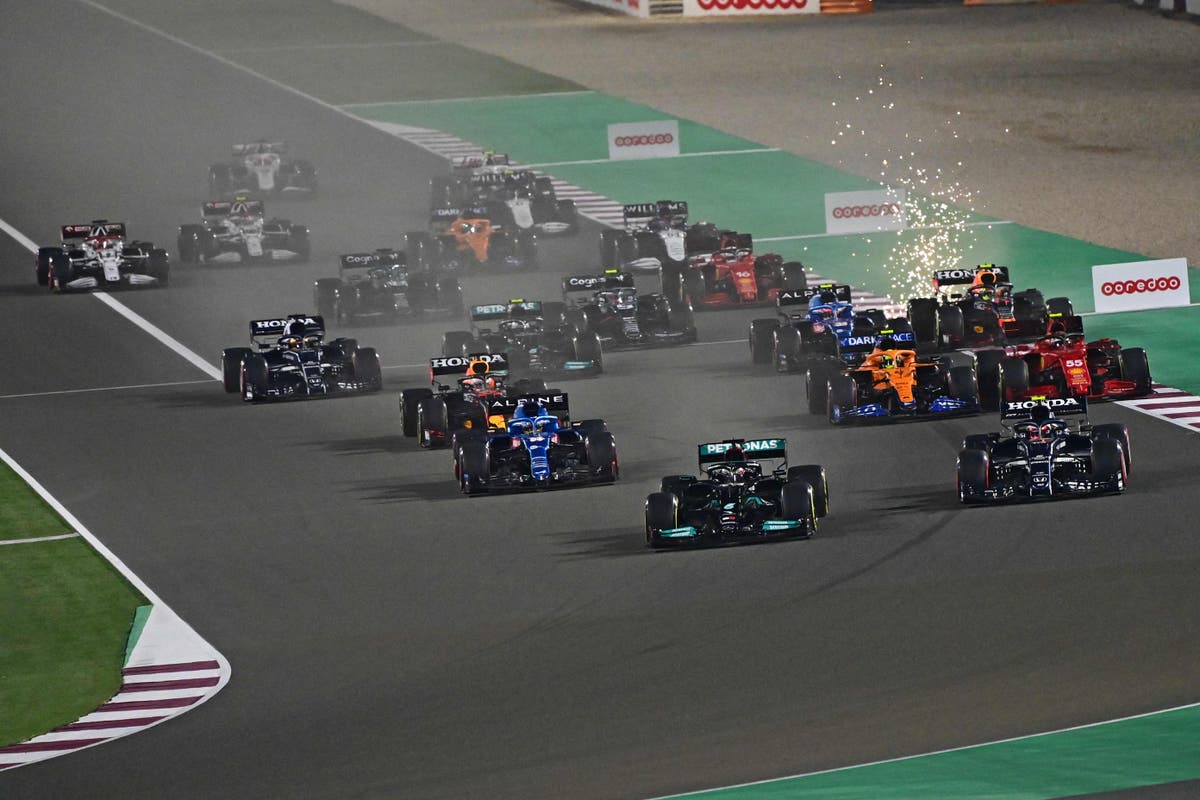 Lewis Hamilton will start Sunday’s Qatar Grand Prix on pole after a dominant performance in qualifying saw him beat Max Verstappen by nearly half a second.

Hamilton’s teammate Valtteri Bottas was knocked from third to sixth for also missing a yellow flag, moving Pierre Gasly to second for the start. Red Bull’s Sergio Perez is down in 11th, giving Mercedes a significant advantage in the strategic battle.

It promises to be another dramatic race in the battle for the world championship, with just two races, in Saudi Arabia and Abu Dhabi, left after this.

Follow all the action with Standard Sport’s LIVE blog below…

Lap 25: Alonso’s immaculate first stint comes to an end and the Alpine comes out ninth on fresh Hards, ahead of Ricciardo and Perez.

Verstappen puts in a fastest lap, with the gap down to 7.5 seconds after Hamilton was held up briefly while lapping Schumacher.

Lap 23: Perez fails to take Vettel on his first run into Turn 1, being sent down the dusty outside line before the Aston Martin swoops across him, backs him into the corner exit, and launches clear to keep 11th for the rest of the lap.

And Bottas gets Norris for fourth! Alonso is 11 seconds up the road of the Finn, what can he do about that?

Lap 22: The gap between Hamilton and Verstappen has stuck at 8.3 seconds since the pit stops. Very comfortable so far for the Brit.

Lap 21: Hamilton is concerned about the strategy, and tells team radio: “You’ve definitely stopped me way too early.”

Perez takes his Hards and drops to 12th, although perhaps won’t lose too much time launching back up the pack given how easy overtaking has been so far.

Bottas looks like he’s going long and has Norris in his sights for fourth.

Lap 19: In comes Hamilton, covering off Red Bull. He’d seconds earlier said his tyres were good and he didn’t want to pit too early!

It’s a straightforward stop and the Brit is almost the whole start/finish straight clear.

The Mediums are done, earlier than others’ Softs, and the Hards go on nice and easy.

Perhaps some strategy there. It will have to be one hell of a theory to catch Hamilton, mind.

While Perez takes Norris for fourth and Bottas has Sainz on toast for seventh. Slick.

Lap 14: Perez is the next to jump Gasly with a clean move off the main straight, he’s up to fifth and a podium seems very possible for the Red Bull No2.

Just five seconds and four places back is Bottas, still very much in the mix for third as well.

Lap 13: Norris gives it some gas to sweep past Gasly for fourth at Turn 1, as McLaren fight back in the Constructors’ battle for third!

More bad news for Ferrari too with Sainz under huge pressure from Bottas for eighth.

Lap 12: Let’s have a check on the leaders – Hamilton has a 5.7-second advantage over Verstappen.

Alonso, in third, is a whopping 22.4 seconds off first place. Just in case you needed evidence of their pace.