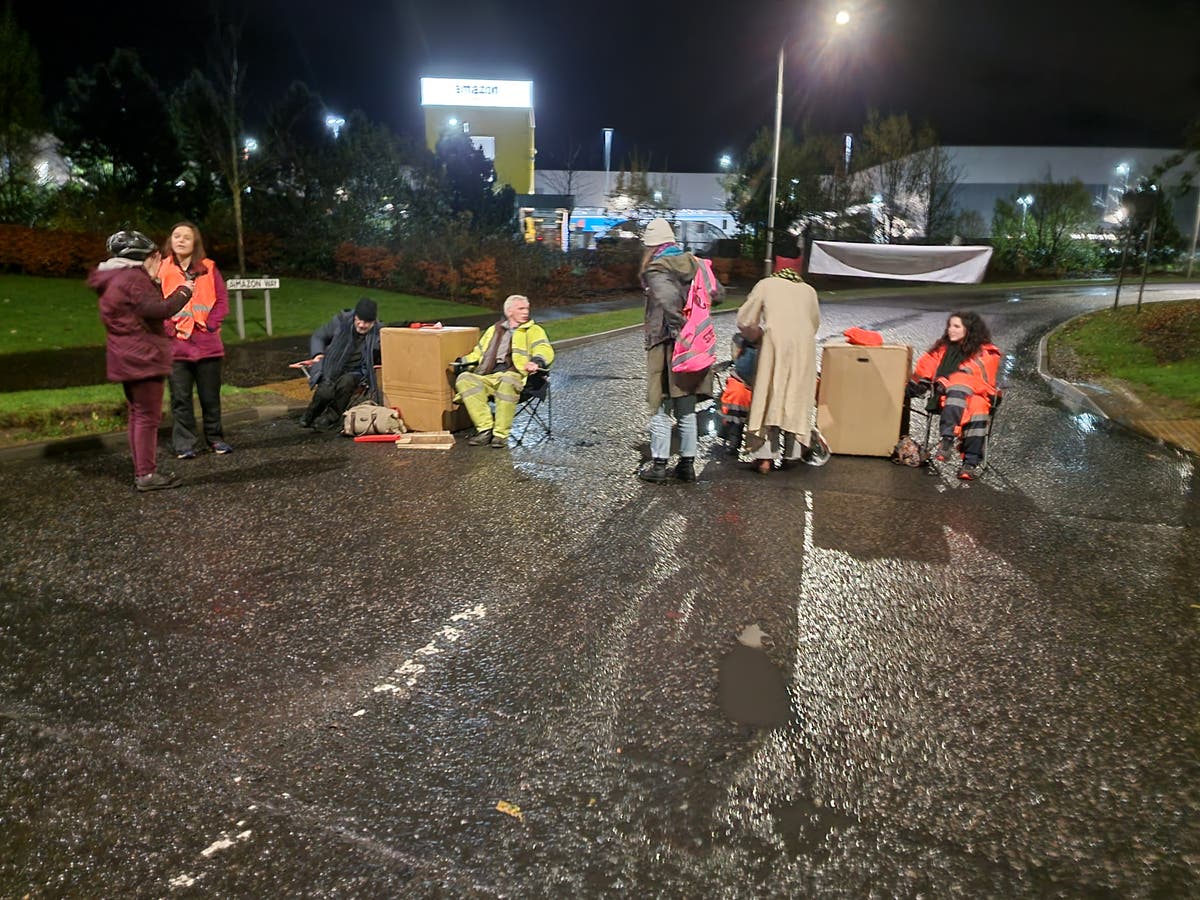 mazon’s largest UK warehouse is being blockaded by climate activists targeting the global retail giant’s busiest day of the year.

Extinction Rebellion’s (XR) Black Friday demonstration, with about 20 activists, started at 4am at the distribution centre in Dunfermline, Fife.

Protesters with “lock-ons” and placards have stopped lorries entering the site and some from leaving.

XR said all of Amazon’s UK distribution centres will be targeted.

We need a new system that respects people and the planet, instead of blindly chasing profit

XR’s spokesperson at the Dunfermline blockade, Meg Paton-Jones, said: “The police have one van on site and they are watching us.

“We started here at about 4am but are not blocking the employees’ car park so the night shift can leave.

“We have good vibes and music.”

An XR spokesperson added: “The action is intended to draw attention to Amazon’s exploitative and environmentally destructive business practices, disregard for workers’ rights in the name of company profits, as well as the wastefulness of Black Friday.

“The blockade is part of an international action by XR targeting 15 Amazon fulfilment centres in the UK, US, Germany and the Netherlands aimed at highlighting Amazon’s ‘crimes’.

“This is happening in solidarity with activists and workers from the global Make Amazon Pay campaign, demanding better working conditions, clear environmental commitments, and for Amazon to pay their fair share of tax.

“Amazon continues to lobby the US government to fight against climate legislation while telling the public they are committed to green initiatives.

“They are committing the very definition of greenwash.”

Protester Eleanor Harris, from Glasgow [email protected] “It is essential we move to a new model of economics that prioritises wellbeing and sustainability over profit.

“The era of exploitative throw-away capitalism will soon be over, either by changing to meet the challenges we now face or by the destruction of our global habitats and societies.”

Maciej Walczuk, a 19-year-old student, said: “We have to recognise that the consumption in the global north is largely based upon the exploitation of the working class and the global south, while companies like Amazon make massive profits and contribute to worsening the climate and ecological crisis.

“We need a new system that respects people and the planet, instead of blindly chasing profit.”