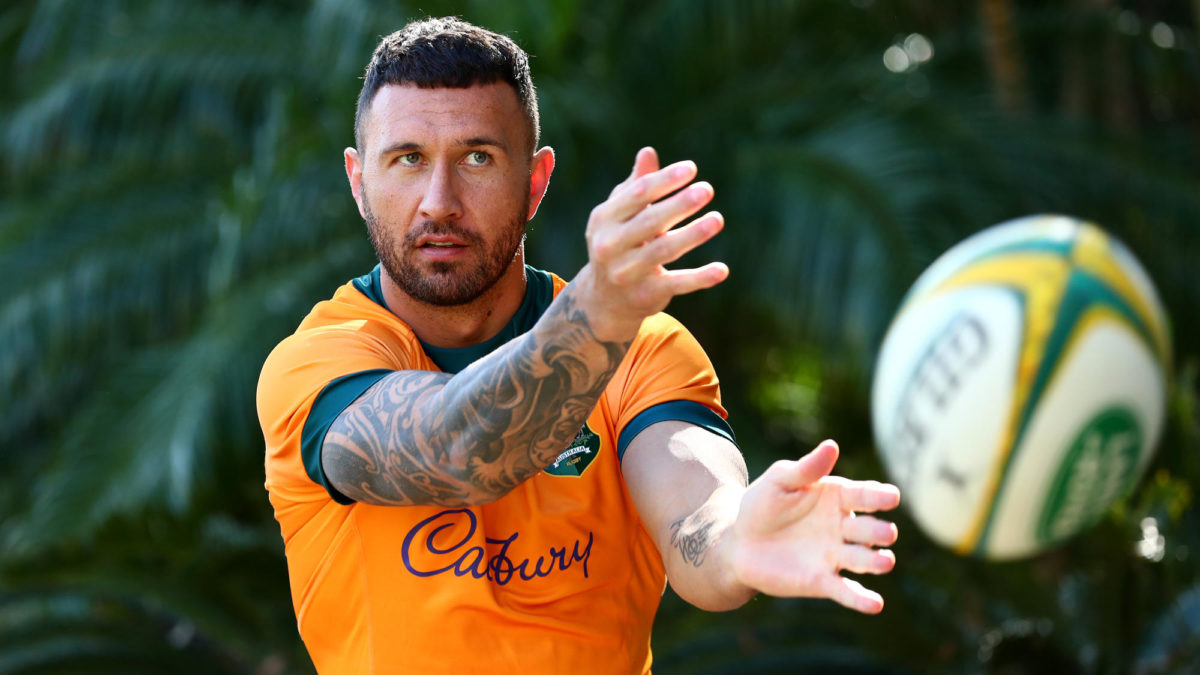 Quade Cooper’s club v country standoff rumbles on, but Wallabies coach Dave Rennie has given the clearest message yet that he wants his revitalised No.10 on the European leg of the spring tour.

Cooper, Samu Kerevi, and Sean McMahon are all in the same situation: The Wallabies can tell their Japanese clubs that they are taking the trio on tour, but they are trying to find a diplomatic solution.

It’s clear the tug of war is yet to be resolved. On Tuesday, Cooper, who will play against Japan on Saturday as McMahon and Kerevi miss out, told media a decision on his continued presence with the Wallabies beyond this week was “above my pay grade”.

Rennie was asked how the situation was developing on Thursday as he announced the team for Saturday.

“The intention is to take him to Europe,” Rennie said.

“Through this process, like I’ve said, from a regulation nine point of view, we can take Quade with us.

“But we’ve been working through with the club out of courtesy, because we want to have a strong relationship with them. We understand that they’ve got goals and aspirations as well. And they’ve got a competition that starts early January. So we’ve been having constant discussions around it.”

But clearly this isn’t going exactly to plan, or would have been resolved already.

Rennie was asked what was clouding the issue, considering the rules being in Australia’s favour.

“I think ‘what’s clouded’ is not so much for us,” said Rennie. “Obviously, we’ve been having ongoing discussions, but as opposed to us just coming in and saying ‘we’re taking him’, we’re trying to talk to the clubs and come to a resolution that suits everyone.

“That’s been our mindset. I think the relationship’s important. We think we’ll get a positive resolution.”

The situation is perhaps clouded by the unique circumstances of the three players, all brought back after their Wallabies careers were on hold for years.

Rennie acknowledged that a solution might involve taking Cooper for one or two of the three Tests against Scotland, England and Wales, to allow him an early return.

“Good defender, good post tackle presence,” Rennie said of the Brumbies hooker. “He’s been with us a fair bit this year. He came in and got knocked out. He had a bit of an ankle injury, which he rehabbed over the last couple of months.

“It’s really exciting for him and his family. He’s very stoked.

“He was with us for most of the French series and he’s used that time really well. So we think he’s in a good spot.”

Rennie had strong praise for the impact of Folau Fainga’a in recent battles.

“Folau has shown the the way recently,” said Rennie. “He’s thrown really good set pieces and I think his game’s grown around the park.”

As for what he’s looking for, Rennie said: “Sometimes it’s a point of difference. We’ve played Lachie Lonergan there and we like him. He’s got a bit to do around the scrum, but he’s very good everywhere else and he gets an offseason to try and put on a bit of size and strength and make shifts around the scrum.

“From Connal’s point of view, he’s got a very good set piece and a real presence in tackle and post tackle, he’s still growing his game around the pack so it’s wide open and a great opportunity for him.”

On picking Tom Wright on the wing over Jordie Petaia

“It’s very close,” said Rennie. “We’re pretty happy with Jordie from the last effort. But we’re anticipating it to be a very quick game.

“We think Jordie’s best value is going to be off the bench. He does give us a fair bit of versatility.”

Rennie said Petaia suffered serious cramps in his last Test outing and “we’re not convinced that he’d go 80 if he started. Based on the balance of the squad, we think it would be best for us to bring him off the bench.”

Rennie said that Petaia was physically strong, but the cramping was an unresolved issue.

“We’re just working through that (cramping issues),” Rennie said. “What we know is the last Test was his first start for a while and when you’re starting you have a bigger load during the week.

“We’re looking at a range of things around why he cramped so badly, it’s not just that he cramped.

Jordan Petaia poses during an Australian Wallabies media opportunity at Ballymore Stadium on May 27, 2019 in Brisbane, Australia. (Photo by Chris Hyde/Getty Images)

“What we’re anticipating is it should be reasonably warm here. Looking at what Japan have picked, with six loosies in the pack, it looks like it’s going to be a reasonably quick game from their mindset and so we’ve taken all that into account.

“It gives us more flexibility with Jordie on the bench where he can cover midfield and outside backs.”

On picking a strong team with only four changes

“We’re picking this Test for this Test,” Rennie said. “We think this is a good combination for Japan.

“That’s our strongest team and the plan is to pick the best side available each week.

“James [O’Connor] is going well. He’s been back in training with us now for three or so weeks, he’s probably as sharp as I’ve seen him in the last 18 months which is exciting for us. It’s a competitive spot. We’re backing Quade based on he’s earned the right to wear the jersey over the last few weeks.”

On the return of Rob Leota at No.6 and Pete Samu to the bench

“We were happy with him a couple of weeks ago, we changed the mix, to give Sean a bit of a crack off the bench and started with Pete.

“We like Pete on the bench. He gives us good versatility and is very good with 25 to go against tiring defences. Rob went well and we’re rewarding that.”

On Kerevi’s ankle injury and the return of Hunter Paisami

“[Kerevi] was pretty close and we gave him every opportunity to come right,” said Rennie. “If we were playing next week he’d be okay.”

He said Paisami will play his own game but give the team similar attributes to Kerevi.

“Hunter is explosive and powerful and has got a really good skill set, so not a lot changes,” said Rennie. “He’s slotted in really nicely. And he’s had a full training week over here and we think it will be seamless.

“It’s been good for Hunter having Samu around. Samu has been direct and given us go forward, made a lot of tackle busts and created opportunities off that. We feel Hunter can do the same thing.”

“He’s obviously been out for a long time. We’re just trying to get him match fit.

“He’s done a fair bit of work with the Waratahs he’s got a good base now we’re just trying to sharpen him up. There’s a fair bit to get your head around from a structure point of view. He’s going well, he’s picking up things quickly but we felt this weekend was a little close for him. Two more weeks, heading into Scotland, he’d be a chance for that.”