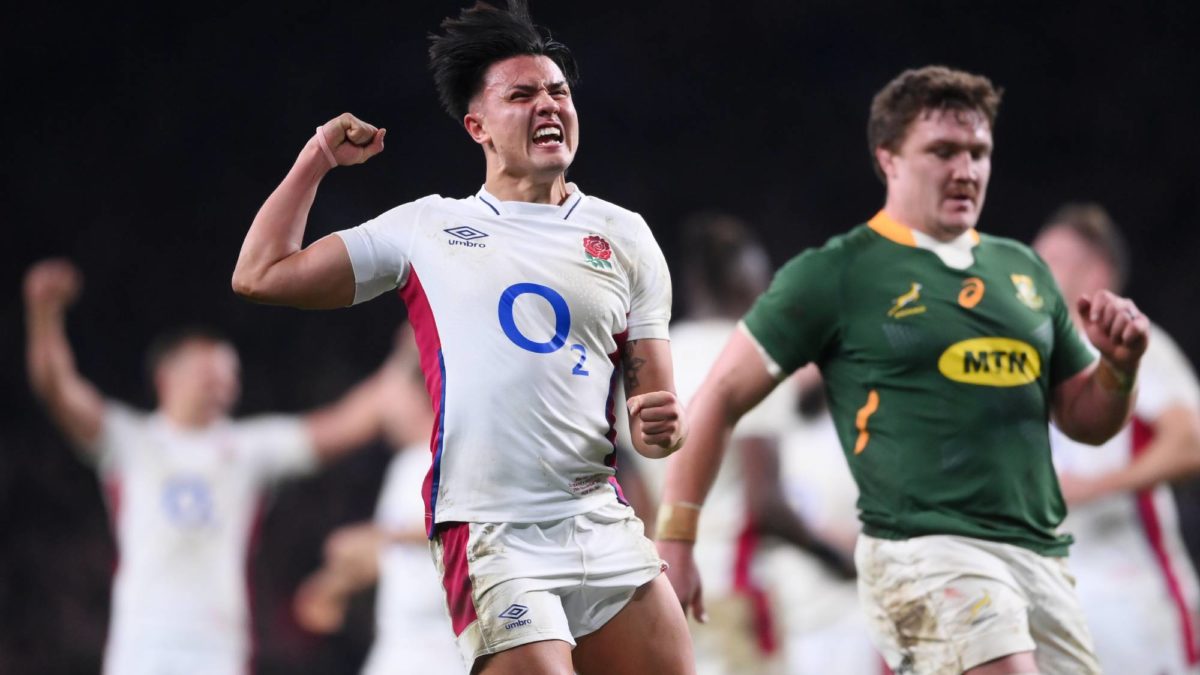 Smith landed the pressure penalty with 15 seconds left to deliver England a tense 27-26 win over the Springboks at Twickenham.

The triumph followed a comfortable 32-15 win over the Wallabies a week earlier as poster boy Smith potted the winning kick to send the England rugby cognoscenti gushing into hyperbole.

“Was this the greatest victory yet of Eddie Jones’ six-year tenure?’ asked Gavin Mairs, writing in the Sunday Telegraph.
https://www.telegraph.co.uk/rugby-union/2021/11/20/england-v-south-africa-live-score-autumn-internationals-2021/

“It certainly felt like that to the Twickenham faithful as Marcus Smith, the poster boy of Jones’ new-look England, landed the decisive penalty in the final minute of an utterly compelling contest against the world champions.

“England’s victory over New Zealand in the World Cup semi-final in 2019 may remain the most complete footballing performance of Jones’ tenure, but given the context there is a strong case to be made that this surpasses the lot.

“It had been a relatively quiet afternoon for the 22-year-old Smith, but players with an X-factor have a habit of making their mark just when it matters.

“And despite the fact that England had been at the receiving end of a heavyweight bombardment from the Springboks that looked to have swung the contest decisively in their favour, a jinking break by the Harlequins fly-half won the match-winning penalty in front of the posts of one of the great dramas at Twickenham.”

“That’s why he gets paid the big bucks,” said a beaming Courtney Lawes, the England captain.

Fabulous, breathless contest. England’s young guns will be hugely buoyed by the outcome.

The Sunday Telegraph colleague Oliver Brown agreed: “Yet this team found, for the first time in the Jones era, a way to win a Test match of the highest magnitude in Manu Tuilagi’s absence, with a dazzling exhibition of the 23-man game that their head coach has long championed.

“Sometimes, Jones invites a certain mockery through his obsession with the term “finishers”. But we saw evidence, in this gloriously breathless outsmarting of South Africa, of why he believes the notion of replacements is inadequate.

“With this emphatic exclamation mark on their year, England’s future assumed a much glossier complexion.

“Jones’s theory is that any newly-assembled squad can take two to three years to bed in fully, before the combinations come good when it matters most. So far, his refreshment of this England line-up is bearing the richest fruit.”

“England did it the hard way, mind, and when the excitement and celebrations die down, I trust Eddie Jones will go through the match in some detail and point out how victory could have been more easily achieved and the areas England must improve en-route to Rugby World Cup 2023,” Woodward wrote in the Mail on Sunday.

The Observer’s Rob Kitson says nothing can entirely erase England’s disappointment at losing the 2019 World Cup final but their future is looking ever rosier.

“Turning over the world champions in the final seconds of a stirring contest in front of a roaring home crowd is never an everyday occurrence and the 80th-minute penalty from Marcus Smith which belatedly settled this extraordinary game was no more than his gallant, persevering side deserved,” Kitson wrote.

“Few, if any, teams in international rugby end up on the winning side having conceded 18 penalties to their opponents’ eight but the try count of three to one against the planet’s meanest defence was ultimately the more pertinent statistic.”

The canny Jones was quick to protect his starlet Smith from the clutches of the media, warning reporters after the match: “Look, he’s going to be good, mate. As long as you blokes don’t pour too much poison in his head.

“He’s a work in progress and each game he’s going to get a little bit better. I thought he did a great job but I know he’s going to be better in the Six Nations.”

“It’s all down to him,” said Smith. “He’s been working hard with me and, again, putting his arm around me and allowing me to explore at the weekend. I appreciated it, big time.

“We said four weeks ago this was the game we wanted to target. The boys bought into the last four weeks. We got extremely close as a group. It was a massive, massive part of our journey as a young group of players and to beat the world champions in front of 82,000 at home was special. It’s a day I’ll never forget.”

The forever hard to please Stephen Jones of the Sunday Times said England appeared likely winners for “a grand total of one minute at the very end.”

“And who cares? When things proceed as predicted they take away drama, they take away glory and pain and triumph. England found a few ways to win it, South Africa found even more ways to lose it.”

The South African press lamented that the Springboks formidable scrum and lineout wasn’t working as it should along coupled with defensive errors.

“England won the match because they took advantage of a period when the Bok scrum wasn’t as accurate as it normally is, where the lineout creaked more than it normally does, and where there were defensive errors that aren’t usually seen from a team as immaculate defensively as the Boks normally are,” wrote Gavin Rich for SuperSport.

“The Boks will be kicking themselves for failing to take proper control on the scoreboard when they came back from their poor first-half performance to completely dominate England in the second.

“Looking at the match as a whole, the Boks did conspire against themselves. They paid for not being as accurate as they normally are at scrum time in the first quarter of the game.

“The lineout also didn’t function as effectively as it usually does in that first half, and those two things combined worked against the Boks, and Jones’s words would have applied to the defensive lapses too.

“This was not a day where the Bok defence was a strength with all three England tries being scored too easily and coming off attacks from set phase ball.”

Brenden Nel in SuperSport said while coach Jacques Nienaber was disappointed at the third Test that the Springboks have lost at the death this year, he believed this Bok side were better than their win percentage this season.

“The Boks lost close games to the All Blacks and Australia in the last few minutes and were beaten again by a penalty by Marcus Smith to give England a measure of revenge after their big World Cup final defeat.

Enjoy it England. The year ends on a sour note for Boks. But they will remember this and they will be back. After this week Im just glad its over. To those gloating. Enjoy your moment.

“Considering this is the second Test that the Boks have lost at Twickenham with one point, there was disappointment at not ending off their season with an unbeaten November tour.”

“It’s clearly disappointing that this is the third Test we’ve lost that way. We were leading up to the 79th minute and we didn’t finish the game. It will be something that we will have to look at, and it was disappointing,” Nienaber said.

“I said to the guys in the changeroom this team is better than the win percentage, we are definitely better than that. We know we lost a lot of development in 2020 and we always said to ourselves this is the year for us. We wanted to compare ourselves to 2019 and not make a big fuss about it. We aren’t there yet.

“We have now played a full year of rugby again and we know where we are – we have one and a half years to improve going into France 2023. We know there are a lot of things we need to work on.”