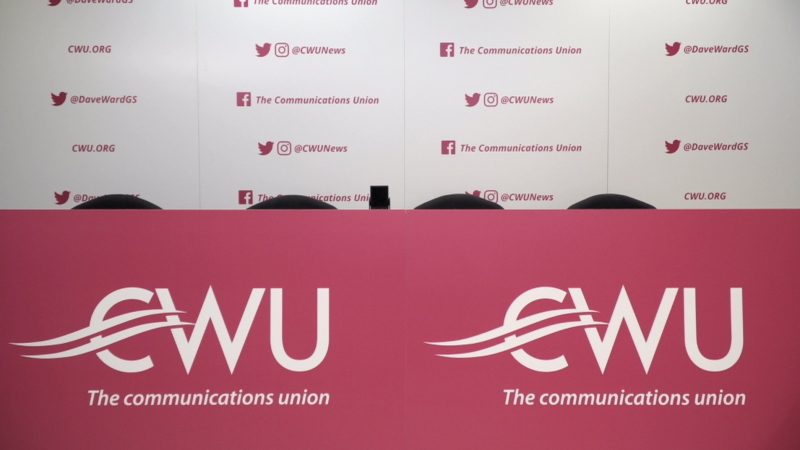 CWU, the left-wing Communication Workers Union for postal, telecoms and tech workers, has voted at its special conference to suspend any donations to the national Labour Party outside of affiliation fees.

Union members voted on Sunday to ensure that, other than nominal affiliation fees, funding for Labour will not go to the national party but instead to specific Labour candidates, potential candidates and campaigns.

General secretary Dave Ward opposed disaffiliation from Labour in the debate on the union’s future relationship with Labour, but called for a new relationship based on working with Labour figures who back CWU industrial and political aims.

Commenting on the motion that passed with 94% support, Ward said: “The decision taken by conference today allows the CWU to focus its political attention on building our movement out in communities.

“The current Labour leadership is failing to connect with working-class communities and that was made clear by the scores of our members who spoke passionately in the debate today.

“In focusing our political resources on those in Labour who are really up for delivering for our members we are looking beyond the factional war being waged by an out-of-touch Westminster politics.

“This is a positive step for our union and a real offer to those in Labour who want to change things on the ground.”

The move comes after the Bakers’ Union, BFAWU, voted to disaffiliate from Labour in September during the party’s conference, accusing Keir Starmer of waging a “factional internal war” instead of focusing on “real change”.

Unite the Union, Labour’s biggest funder, decided in October 2020 to cut funding to Labour by 10%, with then general secretary Len McCluskey saying the money would be used to “support and nurture the newer voices in our movement”.

While emphasising a shift in focus “back to the workplace”, new general secretary Sharon Graham has told Unite that it is “totally wrong” to say the union is “standing down from the political arena” but has also said there will be “no blank cheque” for Labour.

GMB general secretary Gary Smith was supported by Starmer allies ahead of his election in June this year, but has since been a vocal critic of the leadership and warned Labour that donations will be reviewed.

Below is the full text of the motion passed by the CWU.

(1) the current political environment is perhaps one of the most difficult in the history of the Labour movement, and nationally, the Labour Party is failing to break through and seems more concerned with factional infighting than it does reaching out to working people;

(2) the Labour Party’s lack of connection with working people has been decades in the making, but current opinion polling and Keir Starmer’s own approval ratings demonstrate the serious task that Labour faces if it is to ever win power again;

(3) although Labour is struggling nationally, the Party is making a real difference in areas across the country in places where the CWU has strong links with local and regional leaders who also support our industrial and political aims, including metro mayors and council leaders who are delivering on their promises of building council houses, trade union recognised jobs, green-energy, publicly owned local transport and a host of other radical reforms that serve their local communities;

(4) in more recent years, our relationship with Labour has always been underpinned by the idea that the Party will not get something for nothing, and as other trade union leaders are now also echoing this call, we must strengthen that commitment and invest our time, energy and resources with those in Labour who want to deliver the political and industrial aims of the CWU.

Conference agrees the NEC are instructed as follows:

(2) to work pro-actively with Labour leaders across the country who are delivering on-the-ground solutions in their communities right now, as well as exploring all opportunities to link up our own industrial strategies with these political pursuits;

(3) to create a CWU Working Class Candidates Programme that will be held once a year to train up a number of CWU members who wish to become political candidates, either for local or national office;

(4) to refresh and build a more dynamic Political Officer’s Network that brings together Political Officer’s from across the country from branches and regions on a regular basis to feed into and deliver the Union’s national political strategy, ensure a presence in communities and a consistent approach to implementing the direction of this motion.

(5) to refresh and build our ability to campaign politically with a suite of online materials and educational materials that will offer an innovative approach to linking the political with our industrial strategies, such as within issues around the Universal Service Obligation, Post Office, the roll-out of Fibre Broadband, and the casualization of labour.