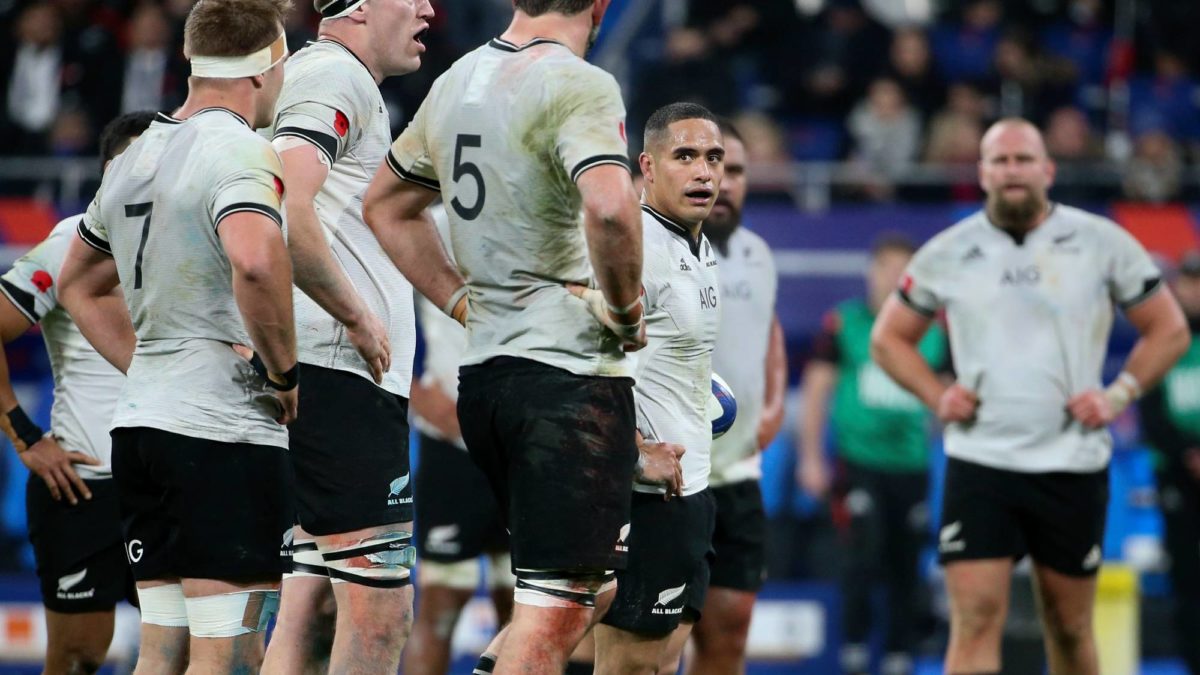 New Zealand’ Rugby’s decision to grant Ian Foster an extension as coach to take the All Blacks through to the World Cup in 2023 is under the spotlight as the nation’s media and rugby fans reflect on a worst return since 2009.

The All Blacks suffered a 40-25 defeat in Paris on Sunday to make it back-to-back losses after a 29-20 reverse to Ireland a week earlier. That makes it three losses for the year, including defeat to South Africa during the Rugby Championship.

Foster’s tenure attracted most scrutiny after a poor All Blacks performance.

“It has been a thoroughly enjoyable experience watching the All Blacks play as though someone’s stolen their magic script, and perhaps even given it to the opposition,” wrote Chris Rattue in the New Zealand Herald.

“Epic performances from Ireland and France will live long in the memory, their victories a fair reflection of the vast superiority they have displayed on those wonderful European fields.”

But while rugby appears to be flourishing in those nations, “rugby has withered in [New Zealand] despite all the advantages it holds, with interest at an unbelievable low at provincial and Super Rugby level,” Rattue said.

Part of the problem, he argues, is a failure to react when New Zealand failed to make the Rugby World Cup final in 2019.

“Rather than see the All Blacks’ 2019 World Cup crash for what it was, that of a coaching regime which had lost its way, NZR turned inwards as it always has done, ignoring any popular wish and sticking with its mates,” Rattue wrote.

“It was almost as if they felt so superior that the incredible semifinal mauling at the hands of England didn’t actually happen, that to break with the Steve Hansen regime would be an unfair insult to the great but overbearing coach.

“That poor decision was the product of a sport which ignores its audience and appears out of touch with the people and the trends of the game. It is an empire which has gone soft.

“And it is coming back to haunt them big time. Tactics and motivation are being exposed. Foster is being completely out-coached, and his team out-muscled.

“NZR has been well and truly embarrassed on the world stage by the Foster appointment. He is making a mess of it. And it is hardly a surprise.”

Rattue said Foster had never been the right man.

“It was a very long time since Ian Foster had been a head coach, and he wasn’t all that successful way back then,” he wrote.

“Those who had done the tough head coach yards in the current era – particularly the people’s favourite Scott Robertson, Dave Rennie and Jamie Joseph – were left on the sidelines.

“All deserved the job over Foster, and all would be doing a better job than him. I have absolutely no doubt about that.”

Gregor Paul, also in the NZ Herald, had a stark assessment of world rugby’s pecking order.

“The All Blacks wanted to end the year as the number one ranked side in the world, but traipsed off Stade de France unsure if they can honestly say, right now, they are even in the top five,” he wrote.

“South Africa, Ireland and France are all better teams. Probably England are too and the shock horror moment is that Scotland would fancy their chances at securing a first ever win against the All Blacks right now.”

He accepted that the “mental and physical fatigue that is locked into the All Blacks” due to the exceptional circumstances of a difficult campaign have played a role and they will “inevitably come back stronger in 2022.

“That’s the All Blacks way and as painful as it no doubt was for some to see them so ragged and loose for such long periods in Paris, that’s arguably not a true reflection of what or who they are.

“But as much as it would be remiss to overly fret about their current state by ignoring the specific and unprecedented circumstances that have required them to be away from home for so long, so too would it be dangerous to not realise that the All Blacks have a number of undeniable issues, many of which appear to be running too deep to be blamed on mounting fatigue at the end of a hard year.

“For the second week in succession, the All Blacks were frantic and wild for extended periods. They have lost their way, seemingly unsure who and what they are at the moment.

“Their gameplan looks confused – an erratic mix of buzzing about behind the gainline and then kicking poorly under pressure. They have become the Italian chef of world rugby – seemingly throwing various ploys at the wall hoping something sticks.

“They lost their heads at key moments, spent 40 minutes chasing shadows and dropping balls and lacked the innovation, speed and confidence of a French team that like Ireland before them, played an inspired 80 minutes.”

He said the All Blacks have lost their fear factor.

“They have seen what the All Blacks are packing and decided it’s not the threat it once was. It’s not a deadly mix of speed, skill and brute force the way it once was and for the second week in succession, the All Blacks were never really in the game.

“What can’t be avoided now is this realisation that the All Blacks are coming home from Europe almost with their tail between their legs.”

Richard Knowler, writing on stuff.co.nz, also honed in on Foster’s tenure and what it meant for NZR.

“The NZ Rugby board desperately needed the All Blacks to win in Paris on Sunday morning. It didn’t get its wish,” Knowler wrote.

“The 40-25 defeat, the All Blacks’ first loss in the great city since 1973, has done little to douse suggestions that NZ Rugby pulled the trigger too soon – they made the news public on August 24 – when confirming Foster would stay in charge through to the end of 2023.

“When NZ Rugby decided Foster, who was initially appointed as a replacement for Sir Steve Hansen after the 2019 World Cup, should be offered a contract extension it came less than two weeks after the All Blacks retained the Bledisloe Cup with an emphatic 57-22 win over the Wallabies in Auckland.

He said Foster will point to the mitigating circumstances of the tour when reflecting on how it ended.

“The record books, though, will forever carry the scars from the last two games,” Knowler surmised.

“Consecutive defeats at the end of a tour is never a good look for the All Blacks. Especially against the lot from up north.

So what now? NZ Rugby won’t go tearing up Foster’s contract. Anything, of course, is possible but it’s more likely to demand a thorough 360 degree review.

“That is likely to involve intense postseason debriefs, and by all accounts they are always extremely thorough. And not for the faint-hearted. Tough questions are asked. Senior players may be consulted.

“NZ Rugby should leave no pebble unturned. It owes that to itself, Foster, the All Blacks and the rugby public.

“That, at the very least, is what is required.”

Liam Napier, in the New Zealand Herald, said the All Blacks were failing to “problem solve week to week.

“Just as South Africa and Ireland proved another big powerful forward pack seriously troubled the All Blacks,” he wrote.

Marc Hinton, on stuff.co.nz, said the two losses had exposed a shift in rugby ‘s hierarchy.

“World rugby has a new global order, and right now the All Blacks are on the outside looking in,” he wrote.

“The Boks remain up there, for sure, despite their year-ending defeat to England, but it’s a group dominated by the powerhouses of the north – France, England and Ireland who have masterfully demonstrated their quite disparate strengths over the last few weeks.

“The All Blacks are officially in free-fall, and have a mountain to climb over the next couple of seasons if they are to be a threat at the 2023 World Cup, back in France.

“All of a sudden, that decision earlier this year to extend Ian Foster’s contract through that global event seems like it might just have been somewhat premature.”

Foster, for his part, was in relatively good spirits in the aftermath of the Fance defeat and expected it to be a catalyst for improvement.

“There’s a lot of disappointment,” he told reporters.

“This group is full of men who are highly motivated and when we don’t get the result it hurts. Part of the reflection is putting the context around this year.

“We spoke about the fact when you compared this team at the start, the amount of players we’ve been able to get on the park, when you look at our record compared to a lot of other nations in 2021, we need to hold our head up high.

“The good thing is there’s a bit of hurt there so that’s going to be great motivation for us.

“The one thing we’ve got to do is not get too downhearted by the last two weeks. It hurts like anything and I know we haven’t got the results we want but tonight we showed better composure in coming back into the game.

“We’ve still got a number of people who are learning what it’s like up here, but we’ve got to deal with a pressure game a little bit better than we are at the moment.”