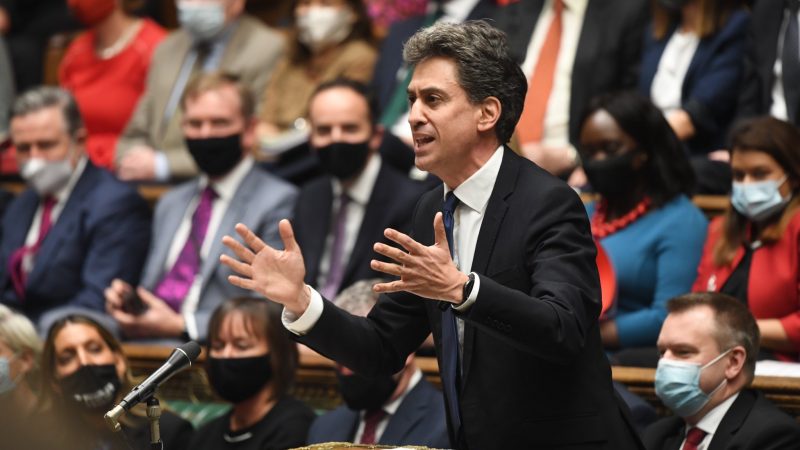 Ed Miliband has declared that the draft COP26 agreement leaves the international community “miles from where we need to be” following warnings from experts that the world is on track for disastrous levels of global heating.

A commitment to phase out fossil fuels has been explicitly mentioned in a draft agreement at the climate summit, which could make the final text, but researchers said on Tuesday that targets submitted by countries would put the world on track for 2.4°C of warming – well above the 1.5°C aim of the Paris agreement.

Commenting on COP26 this morning, the Shadow Business, Energy and Industrial Strategy Secretary said: “The last 24 hours have been a devastating reality check on what has actually been delivered at this summit. We are miles from where we need to be to halve global emissions this decade.

“Today, Boris Johnson needs to stop the spin and confront the reality. Given this summit will not deliver anything like what we needed, now he has to turn to plotting a path out of Glasgow that can keep 1.5°C alive.”

Johnson has travelled back to Scotland. The Prime Minister has urged countries to “pull out all the stops” to limit warming, adding: “This is bigger than any one country and it is time for nations to put aside differences and come together.”

His comments follow the publication of the first draft of an agreement to keep global warming to 1.5°C. The seven-page draft agreement focuses on adaptation, helping countries mitigate the impact of climate change, and finance for poorer nations.

Countries are called upon to mobilise “beyond $100bn a year” in climate finance. It also calls on nations to accelerate the phase out of coal and subsidies for fossil fuels, but has no firm date or target by which this would happen.

But in a report published earlier this week, scientists warned that the short-term goals set out by countries at the summit would result in temperatures in excess of 2.4°C by the end of this century, causing devastation across the globe.

The estimate from Climate Action Tracker stands contrary to an evaluation of long-term commitments made by countries at the conference, such as that made by India to achieve net zero by 2070, which suggested heating could be held to 1.9°C or 1.8°C.

Climate Action Tracker chief executive Bill Hare said: “We are concerned that some countries are trying to portray [COP26] as if the 1.5°C limit is nearly in the bag. But it’s not, it’s very far from it, and they are downplaying the need to get short-term targets for 2030 in line with 1.5°C.”

Climate Action Tracker found that emissions will be twice as high in 2030 as they need to be to stay within 1.5°C and analysts have identified a gap between what countries have said they will do on limiting emissions and their plans in reality.

Scientists said ahead of COP26 that greenhouse gas emissions must fall by about 45% this decade for global temperatures to stay within 1.5°C of pre-industrial levels. Countries were asked to come to the summit with plans to reach net zero by the middle of the century and shorter-term national goals for reductions by 2030.