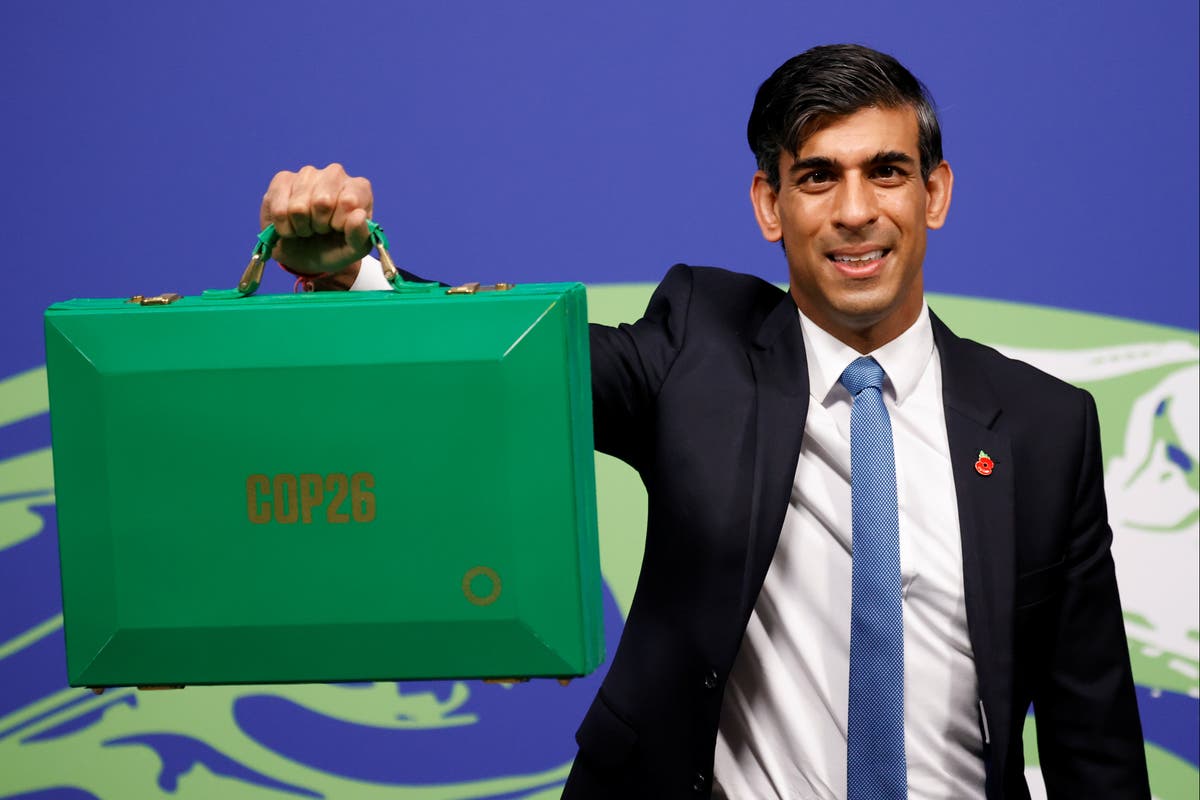 hancellor Rishi Sunak is set to say financial institutions will align themselves to the Paris Agreement 1.5 degree warming limit at COP26 in Glasgow.

Mr Sunak will laud the “historic” climate commitment from global firms that control $130tr (£95tr) of financial assets on finance day at COP26 on Wednesday.

The Treasury says the commitments will help to create a “huge pool of cash that could fund our net zero transition”, including the move away from coal and the shift to electric cars.

Mr Sunak has begun setting out his vision to make the UK the first net zero financial hub in the world.

He told the summit: “Today I am announcing the UK will go further and become the first ever net zero aligned financial centre.”

The Chancellor announced plans making it mandatory for firms to have a “clear, deliverable plan” outlining how they will decarbonise and transition to net zero with an independent task force.

A message by the Queen has been displayed at Piccadilly Circus in central London on Wednesday morning.

Her Majesty also appealed to global leaders to work together in “common cause” against climate change to “solve the most insurmountable problems”.

Police have confiscated an inflatable Loch Ness Monster at Govan Dry Dock after it was seized in a dawn raid.

The four metre tall, eight metre long inflatable monster was set to feature in a demonstration organised by anti-poverty group, Jubilee Debt Campaign, to highlight that there is no climate justice without debt justice.

Members of the Jubilee Debt Campaign stood next to the inflatable, holding signs saying “drop the debt monster” and “climate justice now”.

The Chancellor is warming up ahead of his announcement, set to begin at 9am.

He is expected to outline how UK companies will soon need to publish their plans to achieve net zero by the UK’s target date of 2050.

This is part of his ambition to make the UK the first net zero financial centre.

A public health expert has told how seeing images of hundreds of people in close proximity as they waited to enter COP26 has left her feeling “quite anxious”.

Professor Devi Sridhar, of the University of Edinburgh, told BBC Good Morning Scotland: “It is really concerning, this week I have been quite anxious seeing all that and knowing how fragile the situation has been.

“We’ve controlled the situation for quite a long time. Can we control it even after this big gathering, that’s the question.

Shadow Foreign Secretary Lisa Nandy has described Rishi Sunak’s plans to make the UK a net zero financial hub as “good news” and a “commitment that is long overdue”.

But the Labour MP told Sky News: “The question is whether this actually happens.

“What we’ve seen over the last six years is when attention moves away, those commitments are not upheld”.

She also called on the Government to “lead by example” and include climate commitments in future trade deals.

Chancellor arrives at COP26 ahead of speech

Rishi Sunak has arrived at the SEC in Glasgow ahead of his announcement which is due to begin at 9am.

He was joined by former Bank of England Governor Mark Carney and US Treasury Secretary Janet Yellen.

Wednesday is Finance Day at COP26, with global political, policy and business leaders set to discuss the role of money in achieving net zero.

The focus will be on how to get financial institutions working with governments to achieve global climate targets.

Chancellor Rishi Sunak will be speaking at 9am, followed by the former Bank of England Governor Mark Carney, who will lead an event on transforming the global financial sector to deliver climate goals, at 10.15am.

The COP Presidency (UNFCCC) will be holding a news conference on Wednesday afternoon.

The UK will lead the way to become the world’s first net zero financial centre, a minister has said.

John Glen, the economic secretary to the Treasury, has said the plans to be outlined by the Chancellor on Finance Day at COP26 on Wednesday will make the UK “first jurisdiction in the world to have that net zero obligation for financial services”.

He told Sky News it was “important we take the lead on this matter”.