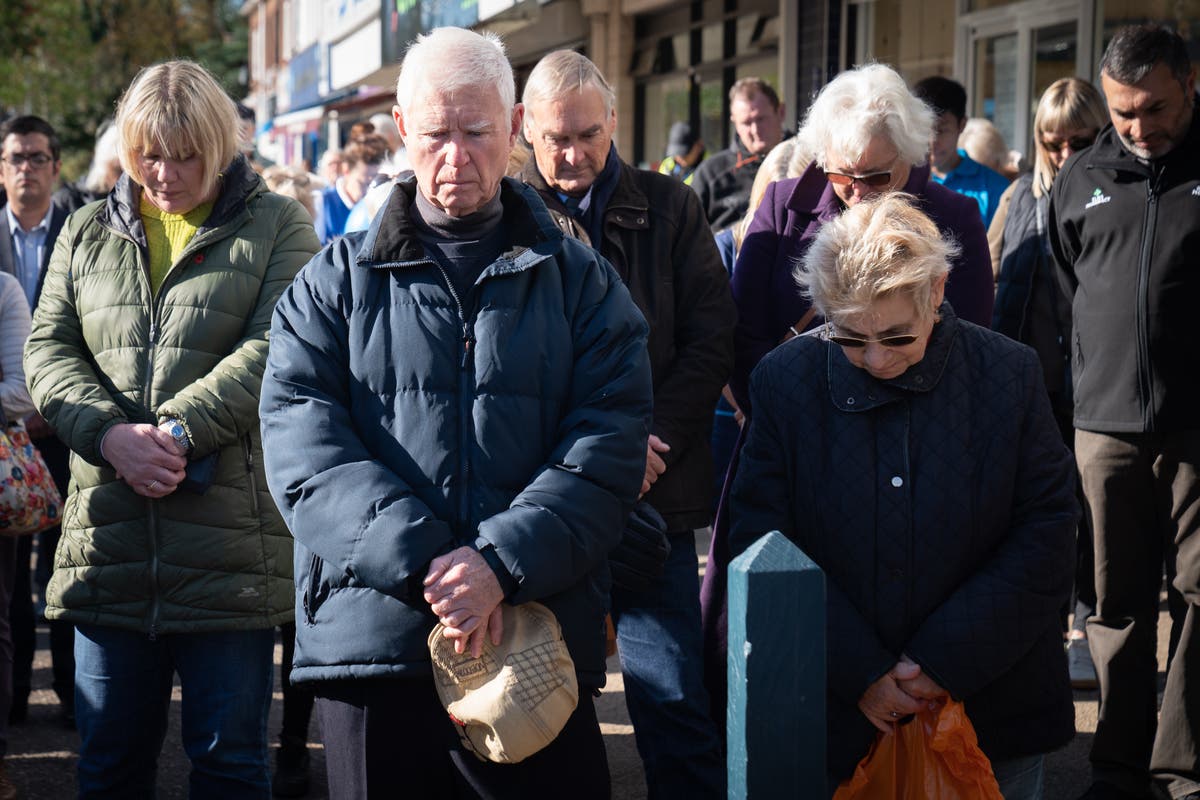 two-minute silence has been held by a community mourning the loss of their MP Sir David Amess, who was killed a week ago.

Sir David, 69, was stabbed to death shortly after midday while carrying out duties in his Southend West constituency.

Local shopkeepers and residents in Eastwood Road North, Leigh-on-Sea bowed their heads and stood in a hushed silence which was broken with applause and the release of blue balloons in respect to the veteran politician.

With many in the community still in shock at the killing, James Duddridge, the MP for Rochford and Southend East, said: “It is going to be very difficult not just for the family but for the whole community.”

Everyone is pleased that we got city status – let’s make something of that and in David’s memory carry on the campaigns, but also to do it in our own way and be civic activists and come together

He said that time may be needed to help everyone deal with the tragedy and recalled Labour MP Jo Cox who was killed outside her constituency surgery in Birstall, near Leeds in June 2016.

After the silence in honour of Sir David, he told mourners: “Speaking to Jo Cox’s family, it took them a long time to recover and we must spend time together as a community and not be afraid to cry and share a cuddle, share a story, to share a funny story as well as a sensible story.

“I think that is one of the things that the Cox family said was really important – to remember a person and spend time together as a community.

“Please feel free to stay, talk and share your stories with me, the clergy, the mayor and the local councillors, with friends and family, so that we can try to make sense of what has happened and, in some small way, maybe bring something good out of this.”

Last week, the Queen agreed that Southend will be upgraded to city status – something Sir David had tirelessly campaigned for over two decades.

Mr Duddridge said: “Everyone is pleased that we got city status – let’s make something of that and in David’s memory carry on the campaigns, but also to do it in our own way and be civic activists and come together.”

The tribute took place took place near the Woodcutters Arms pub, a short distance from Belfairs Methodist Church where Sir David was attacked.

Father Jeffrey Woolnough had rushed to the church when he heard that Sir David, a devout Catholic, had been stabbed in the hope of giving him the last rites.

He was unable to deliver the sacrament as the area had become a crime scene.

Fr Woolnough, who was among those gathered for the silence, said: “He has an incredible gift that he is passing on to us now from his place with the Lord.

“There was a great spirit of reaching out to everyone. He actually enjoyed his work and that is why it is very difficult to find a picture of him online where he is not smiling.

“All of that is infectious, that breaks down barriers.”

He said he spoke to people from all parties, races and religions, and “it was such a great gift and it was tireless because it was sincere”.

Dental hygienist Luke Snelling, who stepped away from his work at the local dentist to take part in the tribute, said Sir David’s death had “really started to kick in” because “he was such a local figure and this was an awful attack on a really nice human being”.

He said: “This is quite a quiet area. I have been quite impressed with how people have rallied around each other in the community.

“I think he would have loved to have seen that spirit, especially as it is his constituents who are trying to help each other out.”

Butcher Tony Phillips, who closed up his shop for the tribute, said: “We are all just so very sad that he is no longer with us.

“We used to see him quite regularly. He used to come in to the shop every now and then to see if we had any problems. He will be sadly missed.

“I think that everybody is down at the moment and people are still in shock.”

Estate agent Rob Cooke said: “Sir David was very much part of the community and obviously we are just gutted with what has happened. I just wanted to pay my respects and to think about him and his family.

“I think it is going to take quite a long time for the community to recover from what has happened.

“I think it has left a hell of a lot of people in shock.

His colleague John Russell added: “I think the nice thing about him was that he was very genuine and a real people person.

“He was always very good at talking to people and remembering names.

“He was very good in the community. You would always see him at schools, churches and things that was happening. It all still hurts.”

The church where the attack happened is to remain closed for two weeks, an announcement on its website said.

Floral tributes to Sir David which had piled up outside the church hall have since been moved to his constituency office, Iveagh Hall.