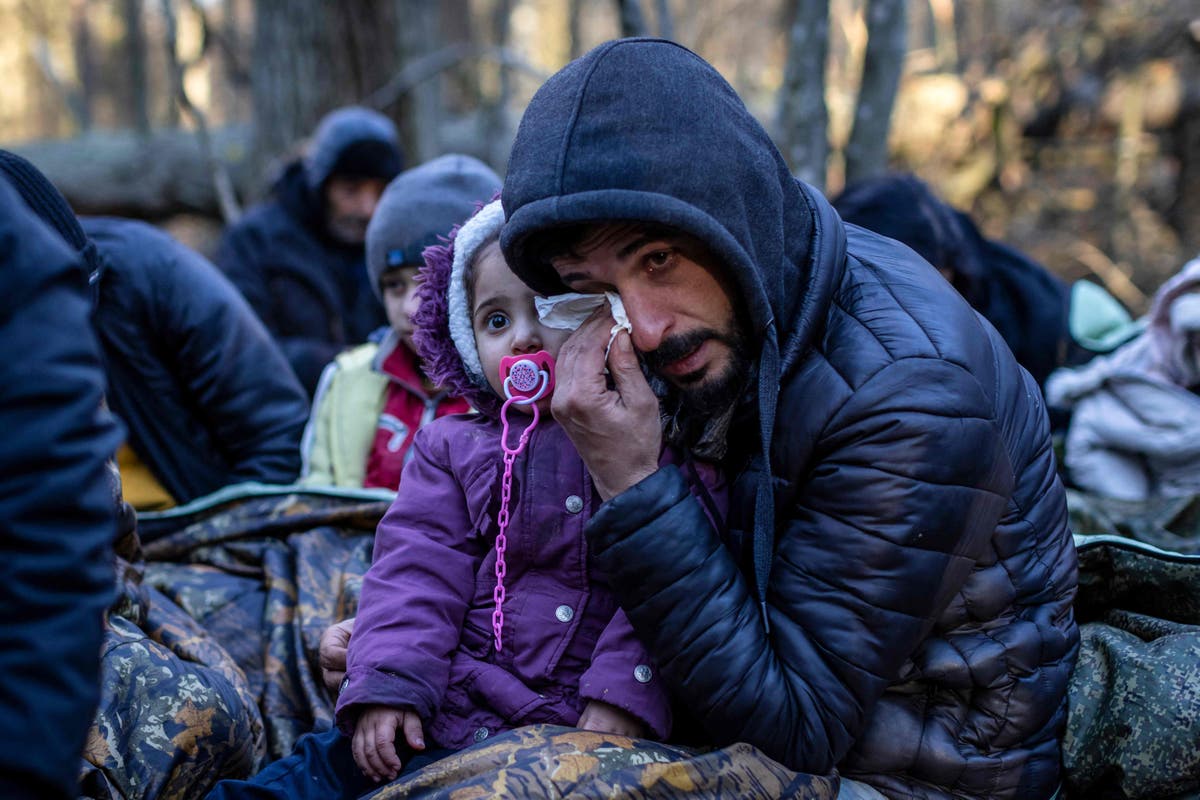 igrants stranded in freezing weather inside Belarus again tried to force their way across the border into Poland, authorities in Warsaw said on Wednesday, as a contingent of troops deployed to prevent them from crossing was reinforced.

Hundreds have set up camp along the border, where razor wire fences and Polish soldiers have repeatedly blocked their entry into the European Union.

Poland and other EU states accuse Belarus of encouraging the migrants – from the Middle East, Afghanistan and Africa – to illegally cross the frontier in revenge for sanctions slapped on Minsk over human rights abuses.

He said that Belarus’s authoritarian leader, a close ally of Mr Putin, is orchestrating the crisis, but “it has its mastermind in Moscow”.

“It was not a calm night. Indeed, there were many attempts to breach the Polish border,” Polish Defence Minister Mariusz Blaszczak told broadcaster PR1.

Blaszczak said all those who tried to cross were detained, and that the force of Polish soldiers stationed at the border had been strengthened to 15,000 from 12,000.

Three EU diplomats told Reuters on late on Tuesday that the bloc was close imposing more sanctions on Belarus over the escalating crisis, targeting around 30 individuals and entities including the Belarusian foreign minister.

The EU earlier on Tuesday accused Belarusian President Alexander Lukashenko of using “gangster-style” tactics in the months-long border standoff, in which at least seven migrants have died.

Meanwhile, Lithuania’s parliament declared a state of emergency at its border with Belarus on Tuesday.

The state of emergency, which began on Tuesday evening and will last for a month, allows border guards to use “mental coercion” and “proportional physical violence” to prevent migrants from entering the Baltic country.

It bans anyone – except border guards – from travelling within three miles of the Lithuania-Belarus border.

Under the decree, mobile phones can be confiscated from migrants and public gathers near the order and in camps may be forbidden.

“The state of emergency is needed to use… extraordinary measures to remove the serious threat posed to society by the massive influx of foreigners,” the motion before parliament said.

The Lithuanian government said on Monday it was moving troops to the Belarus border to prepare for a possible influx of migrants.

Germany’s acting Foreign Minister Heiko Maas said on Twitter on Wednesday the images from the Belarusian border were “horrific”.

“Mr. Lukashenko …unscrupulously exploits people seeking refuge as hostages for his cynical power play… But the European Union cannot be blackmailed.” he said.

Maas said the EU would not leave anyone in need alone.

Lukashenko’s government, which is backed by Russia, denies engineering the migrant crisis and blames Europe and the United States for the plight of the people stranded at the border.