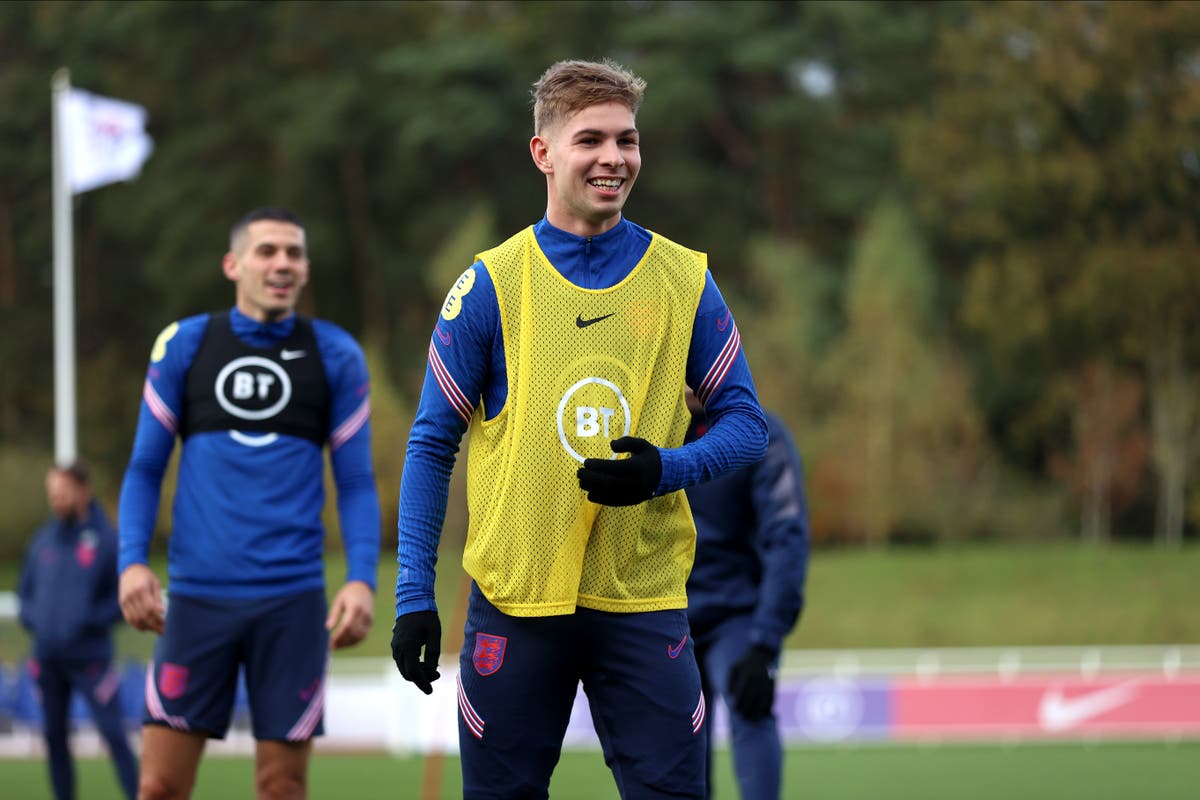 mile Smith Rowe has revealed his ongoing battle with nerves, claiming lockdown football sparked his spectacular rise because there were no fans in stadiums to watch him.

The Arsenal midfielder has established himself as one of the brightest stars in the Premier League over the past 12 months and was this week handed his first senior England call-up.

He is hoping to play in front of a packed Wembley in Friday’s World Cup qualifier against Albania, but explained how behind-closed-doors football during the Covid pandemic gave him the confidence to finally realise his potential.

Smith Rowe was part of England’s under-17 World Cup winning squad in 2017, but had to watch as teammates Phil Foden, Jadon Sancho and Callum Hudson-Odoi all blossomed ahead of him.

Now he has become a key part of Mikel Arteta’s plans , with Arsenal’s Boxing Day win against Chelsea last season proving the turning point in his career.

He believes lockdown restrictions played a huge part in that career-changing moment.

Smith Rowe said: “It was a big game, but no fans definitely helped me. I’m always really nervous before the game and not having that pressure of everyone shouting, that helped me a lot.

“I’m quite surprised that it’s worked out this way. I thought I wouldn’t be as confident as I am at the moment.

“Maybe two seasons ago, just before I went to Lepizig [on loan], it was affecting me. I think now I’m okay.

“It’s mainly in the changing room before the game. That’s when I’m most nervous. I have spoken to some players and that say the same as well.

Smith Rowe thanked Arsenal for helping him achieve his “dream” England call-up after being rejected by Chelsea as a youngster.

The 21-year-old expressed his gratitude to the Gunners for looking beyond his physical deficiencies when he was younger and shaping him into one of the most thrilling prospects in Europe.

He revealed how his Chelsea snub gave him extra motivation to succeed – and how, as a life-long Arsenal fan, he was never going to respond to interest from Tottenham as a teenager.

Smith Rowe has also opened up on the lifestyle changes that have seen his career take off.

He is now a shining light in Arteta’s rapidly-improving team, but it could have been so different had Chelsea spotted his potential.

“I went in for about three or four weeks,” he explained. “But at the time I was quite small, really skinny and just kept getting pushed off the ball.

“I wasn’t getting involved and touching the ball enough, that’s what it felt like at the time, why I didn’t get in.

“So when I went to Arsenal it was more about passing the ball and linking up with each other.

“I’ve always been quite skinny, but I’ve always been tall, so when I was at Chelsea, I wasn’t the tallest, but so skinny and everyone was so physical around me. I didn’t know what to do really, so when I did go to Arsenal they didn’t seem to bother about my physicality.

“But as I’ve grown up I’ve got stronger and tried to focus on pushing people around as well.

“I think Spurs were interested when I was about 15 or 16. I wasn’t that interested to be honest, being an Arsenal fan, although it’s good to have all these teams interested.”

Another factor in Smith Rowe’s recent development has been Arteta’s insistence on him improving his diet.

“I didn’t used to eat that well to be honest,” he said. “I used to get cramp after 60 minutes. I wasn’t eating great, I wasn’t drinking that well, before games I wasn’t really that hydrated, but since then I’ve tried to focus so much on it.

“I think they are strict, but I didn’t really listen to be honest, I think that’s where I went wrong. But now I’m listening, all the time.

“I like Nandos a lot. Maybe that’s killing me a little bit.

“I’ve tried to cut out chocolate and takeaways as much as I can. I’m always eating from home now.

“The club have sorted me out a chef and stuff, they come to my house now.”

It has helped Smith Rowe get to the point where he can hold realistic ambitions of being involved in next year’s World Cup, following this call-up.

“It’s definitely a dream come true, and I didn’t expect it,” he said. “It’s surreal being here at the moment and I’m trying to learn as much as I can.

“Everyone’s so good and I still can’t believe it. It still hasn’t sunk in I’m actually here yet.”