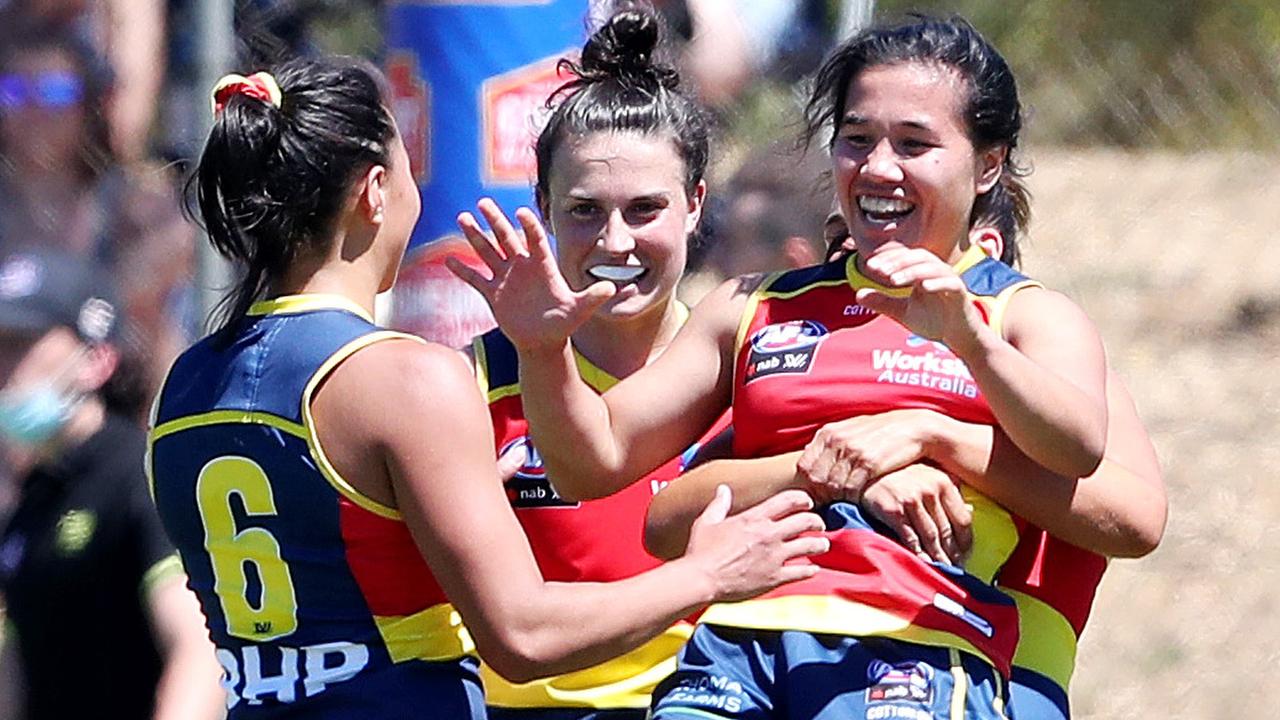 Influential midfielders Anne Hatchard and Ebony Marinoff were also important in the 6.3 (39) to 1.3 (9) win in hot conditions at Flinders University Stadium, with Adelaide keeping the reigning premiers goalless for three quarters for the first time in their history.

To rub salt in the Lions’ wounds, they lost premiership stars Kate Lutkins and Dakota Davidson to injury in the first half.

“When you look at the numbers it was pretty even, but we were just a little bit more efficient and took our chances.”

Hatchard and Marinoff were the prime movers for last year’s beaten grand finalist with 26 and 23 possessions respectively in a midfield unit that overpowered their vaunted rivals.

Allie Anderson (22 touches) and Emily Bates (20) were key players for the Lions but they couldn’t spark the visitors, who lost their season-opening match for the first time.

Caitlin Gould stamped her authority on the game early when she launched at an Erin Phillips set shot and marked strongly in the goal square.

The ruck went back and kicked the only goal of the first quarter.

The hard-working Lions trapped the Crows in their back half and had seven more inside 50 entries, but couldn’t make the home side pay.

Lutkins went down with a knee injury in the first quarter and Davidson rolled an ankle in the second term, with neither able to return to the action.

The Lions will be hoping scans will show that Lutkins has escaped without any damage to her anterior cruciate ligament.

Woodland was a dangerous focal point for Adelaide with goals in the second, third and final terms.

She saved her best for the last quarter with a superb snap hard up against the boundary after Marinoff put her in space and an impressive effort from close range.

Rachelle Martin joined in with a classy set shot before Woodland put the icing on the cake with her fourth major in the dying seconds of the entertaining match.

Greta Bodey saved the Lions from an unwanted milestone when she kicked their only goal with five minutes remaining in the contest.

The star forward, and one of the best contested marks in the competition, was assisted off the ground by trainers seven minutes into the second quarter.

Huntington was trying to complete a regulation lead-up mark when she stumbled and fell awkwardly before clutching at her right knee.

Premiership favourite Melbourne wasted no time in firing a warning shot to the rest of the competition with a dominant first quarter, kicking three goals to none.

It came on the back of pinpoint ball movement coming off halfback, with the Dees able to find the 45 kick into the centre at will and break the lines of the Bulldogs’ defence.

A wayward second quarter from the Dees, in which they kicked 1.6 to the Dogs’ 1.0, left the door ajar for a Bulldogs comeback in the third term.

Nathan Burke’s side obliged, slamming on the first two goals of the premiership quarter to cut the margin to just nine-points, before a Tayla Harris steadier increased the Dees’ buffer.

From there Melbourne was able to dominate field position, winning inside 50s 33-20, and a late Kate Hore goal put the icing on an impressive first outing of the season for the Dees.

Don’t be surprised to see Hore’s name in the All-Australian team this season.

The 26-year-old has been ultra-consistent for the Dees since coming off the rookie list and looks to have taken her game up another level in 2022.

Hore is the prototypical half-forward, and her linkup skills were on show early providing Casey Sherriff with a goal assist for the Dees’ first major, before adding a goal of her own in the second quarter.

The former Goal of the Year winner’s ability to connect Melbourne’s defence and attack is something All-Australian selectors will be watching closely.

All eyes were on hit-and-miss forward Harris after her high-profile move from Carlton in the off-season.

The 24-year-old took just 90 seconds to get her hands on the footy, but the highlight came five-minutes later when she took a trademark contested mark and set up Maddie Gay for the Dees’ second goal of the contest.

Her first goal in red and blue took a little longer, coming 14 minutes into the third term to steady the Demon ship.

Harris finished with one goal, three marks, and seven disposals.

Ellie Blackburn continued her impressive form from 2021 and at one stage looked like dragging her side over the line.

Blackburn kicked an inspirational third-quarter goal to lift her side and bring them back within two goals, but it wasn’t to be.

The ball-magnet finished with 21 disposals, seven tackles, two clearances and one goal.

The Kangaroos seemed to really struggle without their inspirational captain, and five-time All-Australian, Emma Kearney, who tested positive to COVID during the week, as they slipped eight points behind late in the third quarter.

The Cats, who were fielding six debutants, including reigning No. 2 pick Georgie Prespakis, looked on the verge of one of the biggest upsets in AFLW history on the back of immense pressure.

But three goals in a row from Daisy Bateman, Mia King and Kaitlyn Ashmore helped the hosts weather the storm and were ultimately enough to ensure them victory.

Meanwhile, Prespakis made a very impressive debut for the Cats with a team-high 20 touches, 13 contested possessions and seven clearances as well as six tackles.

The result was further soured for Geelong with former Crow Chloe Scheer clashing heads with teammate Claudia Gunjaca in the third term, and co-captain Meg McDonald appearing to injure her left leg in the final quarter.

North’s new recruit Kim Rennie also had to be helped from the ground late in the last term after seeming to knock herself out after flying high for a mark.

The Cats almost pulled off an unlikely victory thanks largely to their pressure, as they convincingly out-tackled the Kangas 65-51, with Amy McDonald (13), Rebecca Webster (nine) and Prespakis (six) leading the way in that category for the visitors. But ultimately, North’s domination of the ball (229-175) and contested possessions (103-92), as well as their edge in inside 50s (27-21), proved pivotal.

With North trailing by two points early in the final quarter, they needed something special to spark them, and they got it from Mia King who engaged in a one-two with Bateman before drilling a ripper from 15m out to give North the lead back.

Julia Crockett-Grills kicked the goal of the day early in the third quarter when she roved the pack superbly and executed a magnificent dribbler on a sharp angle under pressure to put the Cats up by seven points.

A slick and sharpshooting Richmond banked the first points on offer in season 2022 of the AFLW on the back of a Monique Conti masterclass.

The 22-year-old owned the midfield as St Kilda and its rookie coach Nick Dal Santo sharply felt the absence of stars Georgia Patrikios and Tyanna Smith.

Despite heavy downpours moments before the game, the opening quarter of the season was the best in recent memory and was highlighted by fearless attack on the ball and polished ball movement.

The arm-wrestle of a quarter ended with St Kilda taking the slenderest of leads into the break, but that was as good as it got for the Saints.

Jess Hosking’s first quarter since crossing from Carlton to play alongside sister Sarah yielded just the one touch of the ball.

Stationed in defence, the 26-year-old bounced back after her lacklustre start to become a pivotal rebounder for the Richmond defence and finished with 11 touches.

After quarter-time the Tigers flexed their muscle to outscore the Saints 49-10.

This was on the back of Conti (29 disposals and six tackles) and Tess Lavey (19 disposals) in the middle, and Courtney Wakefield, Meagan Kiely, Christina Bernardi, and Katie Brennan all kicking two goals and providing firepower up forward.

A thunderous storm that brought with it massive downpours couldn’t dampen the first quarter of the AFLW season.

A dim and dour affair looked to be on the cards as crowds dodged massive puddles on their way to the ground, but 20 minutes later they had been treated to an enthralling contest and footy appetites were satisfied once more.

The first goal of the season, a near-50m bomb, came at the eight-minute mark courtesy of the Saints’ Tarni White.

A goal in the shadows of quarter-time to Bernardi capped off the hottest opening quarter of an AFLW season ever.

Conti took no time to stamp her authority as one of the hottest players in the competition on the back of a breathtaking first quarter.

The 22-year-old midfield dynamo owned the midfield, and her disposal was a class above as she kept the Tigers pressing St Kilda’s defence.

Conti finished the quarter with a game-high eight disposals and three tackles, before building on her stellar game to collect 29 touches and six tackles.

Dal Santo heaped praise on Conti after his side fell to a 38-point loss. He said the Saints had tried different things to curb the influence of Conti, but nothing could stop her.

“We tried a couple of things,” Dal Santo said.

“It’s more than the numbers she has, it’s the impact. When she received the football even facing away from goal, she’s got that ability to cut and swerve and work her way through the defence and have an effective possession going forward.”

The absence of two of the competition’s midfield guns was always going to be a tricky void for Dal Santo and St Kilda to fill.

And it proved to be the case as the Tigers had their way with the Saints around the ball, winning clearances 28-20.

There was a bright spark to come out of the game for the Saints, as Tilly Lucas-Rodd helped herself to a buffet of football, collecting 20 disposals for the game.

The 25-year-old had an average of 11 touches per game coming into the contest.

“I thought their work around stoppages and contested situations in general were really good and clearly better than ours,” he said.

“I thought their ability to overlap with handball to break the lines to get the ball into their forward half put a lot of pressure on us behind the football.

“I felt they were in control of stoppages and contested possessions and were a lot more threatening at times coming forward of the football.

“The uncontested possession on the back of that, I thought going forward, they had easier and better shots.”

One of the shining lights for St Kilda was the performance of Tilly Lucas-Rodd, who collected a team-high 20 disposals.

Dal Santo said he would leave the 25-year-old in the centre going forward.

The St Kilda coach said he expected Kate Shierlaw and Nicola Xenos to be back in his side’s line-up next week after missing through AFL health and safety protocols.

Originally published as AFLW 2022: All the latest news, results and injuries from Round 1